A Look at the History of Funerals

I have only been in the funeral profession for a short time so I am continuously learning from the funeral professionals at our funeral homes.  The customs of today are very different from the customs of long ago as well as the not so distant past. It wasn’t more than 10 or 15 years ago that the majority of people chose burial as their means of disposition.  These days, many people choose cremation. The customs of funerals also vary from region to region and culture to culture. The history of funerals is a substantial subject because funerals have been with us since the beginning of human history.

In a recent blog post, we discussed current thoughts on funeral etiquette.  In this post, we will explore some of the history of funerals.  The term funeral derives from the Latin word funus, meaning “funeral, funeral procession, burial rites” or “death, corpse.” The word initially referred specifically to the burial of the dead until the early 1500s, when its meaning broadened through usage to refer to the ceremony surrounding burying someone who died.  Source: https://www.verywellhealth.com/what-is-a-funeral-1132112

Until the 20th century, in the US, funerals were organized by family and/ or friends and were typically held in the home.  Most people were buried on the family property. Later, as populations grew, cemeteries and funeral homes began to emerge.  If we are to explore the beginning of the modern funeral home, we must first discuss embalming. Embalming began during the time of ancient Egyptians.  Remember King Tut’s tomb? In the US, embalming gained prominence during the Civil War. It became necessary to embalm soldier’s bodies to preserve them for the trip home. 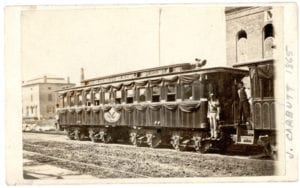 It is noteworthy that we have become sensitive to certain words in our society.  For example, I have always been uncomfortable with the term “undertaker”. It just seemed to be insensitive to me.  But, as I have been researching the history of funerals for this blog post, I learned that the word comes from reference to the person who “undertook” the responsibility for funeral arrangements.  It isn’t directly related to burial, as I thought. It was often the furniture makers that undertook the task because building caskets was reasonable extension of their business. Mostly, this was a second business to that of their furniture production.

Instead of traveling to the home to preserve a dead body, undertakers now transported the body from the home or hospital to a central place of business. Many undertakers lived in the funeral home and their families often assisted in running the business.  Source: https://classroom.synonym.com/history-of-funeral-homes-12079151.html

According to the U.S. Bureau of Labor Statistics, “All funeral directors must be licensed by the state in which they work …” and “must have at least an associate’s degree in mortuary science.  A growing number of employers, however, prefer applicants to have a bachelor’s degree.” Applicants must be at least 21 years old, complete two years in a mortuary science program approved by the American Board of Funeral Service Education, and serve a one- to three-year apprenticeship.  Source: https://classroom.synonym.com/history-of-funeral-homes-12079151.html    West Virginia requires an associate degree before you can begin mortuary school.  Ohio requires a bachelor’s degree and a two-year apprenticeship. In the Ohio Valley, we are privileged to have fifteen professional funeral directors at Altmeyer Funeral Homes and CARE Funeral & Cremation Specialists that serve the families who choose us.

Before I conclude this post, I will leave you with an interesting connection to funeral service:

There are several modern euphemisms tied to the history of funerals, too.  The phrases “saved by the bell”, “dead ringer” and “graveyard shift” are some examples.  Both phrases seem harmless and are used in our everyday conversations, but both came from an interesting story.  England is old and small and the local folks started running out of places to bury people. So, they would dig up coffins and would take the bones to a bone-house, and reuse the grave. When reopening these coffins, one out of 25 coffins were found to have scratch marks on the inside and they realized they had been burying people alive.  Soon after, they tied a string on the wrist of the corpse, lead it through the coffin and up through the ground and tie it to a bell. Someone would have to sit out in the graveyard all night (the graveyard shift.) to listen for the bell; thus, someone could be “saved by the bell” or was considered a “dead ringer’.

This post could go on for days, but I thought this would be enough to peak your interest.  If you would like to know more about the history of funerals, I encourage you to visit these Websites:

Sarah Barickman is an outreach director and life celebrant at Altmeyer Funeral Homes and CARE Funeral & Cremation Specialists in the Ohio Valley.  She and her husband, Mike, have lived in Wheeling for 19 years, where they have been raising their two children, Lilly & Haden.  Sarah is a collector of people, she has never met a stranger and will always strive to be of service to others.