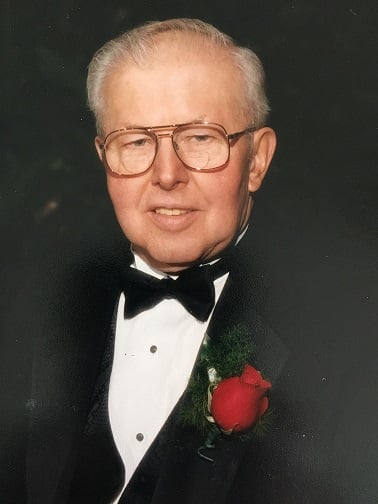 He was born in Boggs Run, West Virginia to the late Steve and Katie (Vichich) Rubcich.

After graduating from Union High School in Benwood, he served in the US Army during World War II and was stationed in Iceland before being discharged in 1947.

Adolph worked on the B & O Railroad, then as a pipe fitter and refrigeration mechanic at Consolidated Aluminum in Hannibal, Ohio. He was a jack-of-all-trades, but wood-working was his passion and his children have many pieces in their homes. Adolph was a member of the Lodge #2 of Croation Fraternal Union and the St. Mary’s Catholic Church in Shadyside, Ohio.

In addition to his parents, he was preceded in death by his wife, Martha Lee (Flading) Rubcich, sister, Mary Melco (Mozart, WV) and brother, Emil Rubcich (Marion, OH).

Family and friends will be received on Friday, May 31, 2019 from 4 to 7 pm at the Bauknecht-Altmeyer Funeral Homes & Crematory 3900 Central Avenue Shadyside, Ohio. Funeral liturgy with Mass will be celebrated on Saturday, June 1, 2019 at 10 am at the St. Mary’s Catholic Church in Shadyside, Ohio with Fr. Daniel Heusel, as Celebrant. Interment in the Greenwood Cemetery in Wheeling, West Virginia with Full Military Honors by the Belmont County Veterans Association.

In lieu of flowers, the family requests donations to be made to the American Heart Association by going to TMCFunding.com.

Share your thoughts and memories with Adolph’s family at www.bauknechtaltmeyer.com.

May you find comfort in God and his promises to wipe the tears away and end death forever. (Revelation21:3,4) My hope and prayer is that you find peace of mind in the memories and the hope to one day reunite in happiness and perfect health. (John5:28,29) Find more comfort visit jw.org. I send my love.

Marta, so sorry to hear about your Dad. Old softball friend of you. My dad coached us on the American Legion softball team.

We are so sorry for your loss. Our prayers are with you.
Jim and Judie Holler.

Marta – Your Dad was truly an amazing man. You are all in my thoughts and prayers.

Marta, David and Leslie, I am so sorry for your lost. Your Dad always treated me like a third daughter and I will never forget him. All of you including your father are in my prayers.

May your memories of Adolph Rubcich, give you peace, comfort and strength…

Marta, David, and Leslie, so sorry for your loss. He was a wonderful man.

Leslie and family-
I am so sorry for the loss of your Dad. He did an outstanding job raising you three. I bet there is an amazing reunion happening in Heaven. Many prayers for peace and comfort ♡