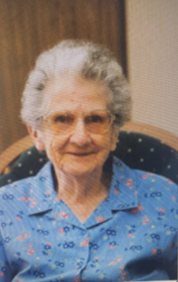 She was born March 19, 1924 in Moundsville, West Virginia a daughter of the late James Oliver and Charlotte (Knipper) Scott.

Family and friends will be received on Saturday, October 15, 2022 at the Bauknecht-Altmeyer Funeral Home, 186 Main Street, Powhatan Point, Ohio 43942 from 11 am until time of service at 1 pm with Pastor Gordon Gee officiating. Interment will follow at Powhatan Point Cemetery.