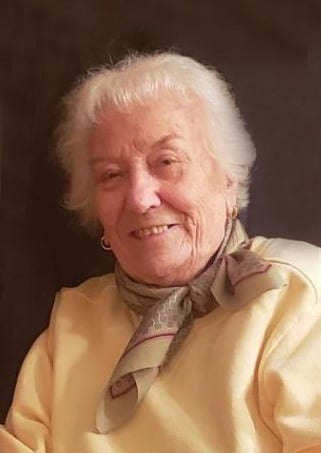 She was born November 27, 1927 in Powhatan Point, Ohio daughter of the late Michael “Mike” and Anna Pencak Bednar.

Ann was the retired owner and operator of Hank’s Place and Frosty Treat and a former member and past president of the Powhatan Womens Club.

Family and friends will be received at the Bauknecht-Altmeyer Funeral Homes & Crematory 186 Main Street Powhatan Point, Ohio on Friday from 2 to 4 and 6 to 8 pm where services will be held on Saturday at 2 pm with Dale Ingold officiating. Interment will be at the Powhatan Cemetery in Powhatan Point, Ohio.

Memorial contributions may be made to the Belmont County Senior Services (Meals on Wheels) or the Powhatan Public Library by going to TMCFunding.com.

Share your thoughts and memories with Ann’s family at www.bauknechtaltmeyer.com

Brady, Bobbi and entire family, so sorry for your loss. Hugs and prayers for you all at this difficult time.

So very sorry for your loss…Ann was so very good to me when I worked for her,.I learned a lot from her.. Sorry I can’t be there but know you are all in my thoughts..

Julie, Sis, Tina and family,
So sorry to hear about your loss. May you find comfort during this difficult time and peace. She was a beautiful lady inside and out.
Sincerely,
Christine Thomas

Brady, Sis, Tina and Julie.
Sorry four your loss! I will remember her as great hardworking mom! Keep her alive with stories and laughter. My deepest sympathy.

Brady and sis, sorry for your family’s loss.thoughts and prayers are with your family.

Brady, Sis, Tina,
So many good memories of Ann always a beautiful person to know. She was a successful business lady in Powhatan Pt. I still have a sweatshirt from Hank’s Place. Ann was wonderful lady and will be missed.

So very sorry for your families loss. Prayers for all the family during this difficult time

Prayers for the family. So sorry for your loss.

Our most sincere condolences. She was always a nice lady. I always enjoyed her company. Tom and Joni Fox

So sorry for your families loss. I grew up around her. She was a sweet lady. My thoughts and prayers are with all the family.