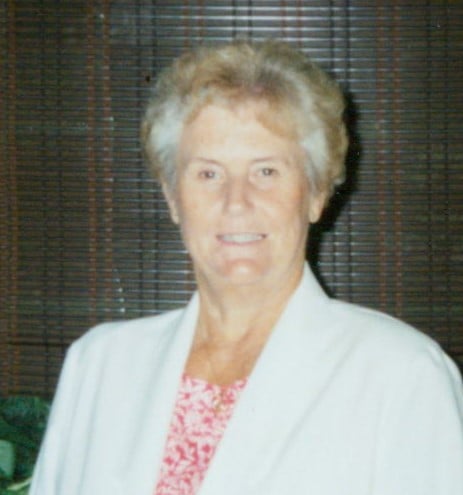 Anna Marie transported children to/from school and athletic events from 1971-1997. Many names are scrolled on the birthday paddles she still has at home. You would seldom accompany mom anywhere she was not recognized and addressed with love and fond memories. Ann was a life long member of the United Methodist Church (Director of Methodist Youth Choir) and was regularly involved in charitable work through the UMW, Powhatan Women’s Club (1950’s) and Good Samaritan Needy Cupboard. She was an auxiliary member of the American Legion, a member of the Eastern Stars and contributed to many community efforts with her time and gift of baked goods. Ann did not know a stranger and shared her love of Jesus and gift of prayer throughout her life. Many would find solace at her kitchen table and generous hospitality of home cooked meals. Her domed cake plate was seldom empty and eagerly enjoyed by everyone.

She was preceded in death by her loving husband Eugene, a daughter Pamela Kriechbaum, brother Lawrence (Whitey) Flor, and sister Flo Moore.

Family and friends will be received Thursday, October 14 at the Bauknecht Altmeyer Funeral Home and Crematory 186 Main Street, Powhatan Point, Ohio from 6-8 and Friday, October 15 from 10am until the time of service at 1pm with Michelle Lucarelli officiating. Interment in Powhatan Cemetery, where the American Legion Women’s Auxiliary will have a graveside service.

Share your thoughts and memories with Ann’s family at BauknechtAltmeyer.com

Thinking of all of you. Your Mom was a very special lady!

I’m sorry to hear this. My thoughts and prayers are with you all. I will always remember family reunions at your home.

Sorry for your loss. Sending hugs and love

So very sad to hear the news of Anna Marie’s passing. I always considered one of the pillars of greater Powhatan. So much love to so many from her. My deepest condolences to her family and friends.

My heart aches knowing that another wonderful person has left us. Anne was such a loving person. We always had such a great time in their home. My heart goes out to all of the family, children, siblings, grandchildren. I know that Pam was there waiting for her. Thoughts and prayers to all.

So sorry for your loss. We advised Marian Glass of her passing ans she is heartbroken. We appreciate the support she gave to Marian during Marian’s current health crisis.

Such a kind, sweet, loving lady. I have wonderful childhood memories of being on her School Bus in the 70’s , Monday -Friday. She always greeted us with a smile. So sorry for your loss, my thoughts and prayers are with you all.

Aunt Ann had the gift of making you feel special and loved. She was a strong, inspiring woman. My condolences to the family.

I am so sorry to hear this sad news. Ann was a wonderful lady who made us all feel welcome at her home. I hope you all know that she touched so many lives. Sending love and hugs to you all.