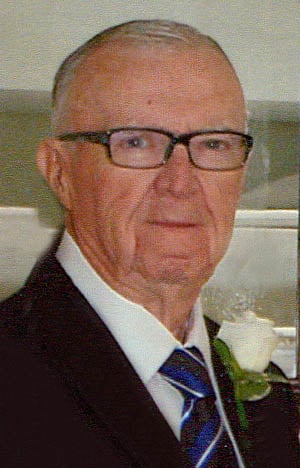 He was born September 2, 1936 a son of the late Walter and Rita (Riehl) Lyden in Wheeling, WV.

Brian worked for 41 years at the Wheeling Pittsburgh Steel plant in Yorkville, Ohio.

He was a graduate of the St. John Central class of 55.

He served in the Army on active duty during the Berlin Crisis.

He loved gardening and was himself a master gardener.

He also made his own wine and taught others the craft.

Brian was a former member of the Ancient order of Hibernians and was very proud of his Irish heritage.

He and his wife served for ten years as 4-H advisers.

He also assisted as an alter server in St. John Catholic Church.

Brian was preceded in death by his parents; as well as a son, Christopher J. Lyden, a brother Walter “Sonny” Lyden Jr. and a sister Kathleen “Pinkie” Lyden.

In addition he is survived by his grandchildren, Matthew B. (Kate) Lyden, Erika Flanigan, Brittany (Justin) Wells, Corey Lyden and Sally (Joshua) Materkoski; along with his great-grandchildren, Aubree, Silas, Sawyer and Madelynn, and many nieces and nephews.

Family and friends will be received at the Bauknecht-Altmeyer Funeral Homes & Crematory 441, 37th street, Bellaire, Ohio 43906 on Wednesday September 30 from 2-4 and 6-8 pm.

Funeral liturgy with Mass will be held on Thursday October 1, 2020 at 10 am at St. John Catholic Church in Bellaire, Ohio with Fr. Daniel Heusel officiating.

Final disposition will be held by the family at a later date.

Memorial contributions benefit the St. John Catholic Church and the Alzheimer’s Association by going to “TMCFunding.com”.

Share your thoughts and memories of Brian with the family at www.bauknechtaltmeyer.com

Dear Nancy our heartfelt sympathies go out to you and your family on the loss of Brian. He was a good man to everyone. Will miss our conversations on winemaking. Your are in our prayers.

Nancy and Family. So sorry to hear that Brian passed away. He was a good friend in my youth . My condolences to you and your family.

We are sorry for your loss. May her Rest In Peace. May our Lord bring you comfort and peace through the memories you share.

Condolences to Nancy and the family. My sincerest sympathies. May he have been in the hands of the Lord before the devil even knew he was gone.

Dear Lisa and Lyden Family. Deepest sympathy on the passing of Brian Sr. May his memory be ever in your hearts and the good times recalled on significant memorable days in the future.

Nancy We are so very, very sorry for your tragic loss. May God always comfort you and yours now and in the future.

Dear Lisa and Lyden family, our sincere condolences to all of you at this sad time. Mr. Lyden was such a happy person whenever I saw him and always a gentleman. I’m sure God greeted him with open arms at heaven’s door!

So sorry Brian, Mark and Lisa. Your dad was an amazing man. RIP Mr. Lyden!