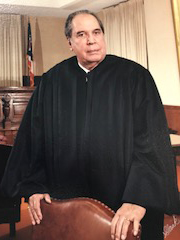 Charles F. Knapp, 94, of St. Clairsville, OH died Sunday, April 8, 2018 at his home. Charles was born on December 5, 1923 in Bridgeport, OH a son of the late Edward and Daveina Wilkinson Knapp. Charles graduated from Bridgeport High School in 1941. In WW II, he enlisted in the U.S. Army in March of 1942 and served as a Staff Sergeant in field artillery. He was in Saipan for two months and in the battle of Okinawa. Charles was discharged in March of 1946 at Fort Lawton, Washington. He married Mary Evelyn Link in June of 1947.

Charles did undergraduate work at Georgetown University, Washington, DC while in the Army. He graduated from The Ohio State University, School of Law in December of 1949. He began the practice of law in 1950. He was Chief Counsel for the Department of Highways in Division 11 from 1950 to 1963, was the assistant Attorney General in the State of Ohio from 1963 to 1964, and assistant prosecuting attorney in Belmont County from 1965 to 1977.
Charles was instrumental in creating the first three water and sewer districts in Belmont County, York township water authority in Jefferson County, Lee township water authority in Monroe County, Tri-county water authority in Belmont, Jefferson and Harrison County, and the sewer authority for Brookside, Bridgeport, Bellaire and Martins Ferry. He was Common Pleas Court Judge from 1985 to 1997 and traveling assignment Judge from 1997 to 2002.
Charles was President of the Eastern Ohio Regional Wastewater Authority from 1960 to 1985. He served as past Grand Knight of the Knights of Columbus, member of the Bridgeport Eagles, American Legion, Veterans of Foreign Wars, member of the Ohio Bar Association and past president of the Belmont County Bar Association.

In addition to his parents, he was preceded in death by his first wife Mary Evelyn Knapp.

Friends will be received on Thursday from 4-8 pm at Beck-Altmeyer Funeral Home & Crematory 204 West Main Street St. Clairsville, OH with a vigil service at 7:45 pm.

Funeral Liturgy with Mass will be celebrated Friday at 11 am at St. John Catholic Church, Bellaire with Fr. Dan Heusel as celebrant. Burial will follow in Mt. Calvary Cemetery, Wheeling, WV. Full Military Honors will be conducted by the Belmont County Veteran Association graveside.

In lieu of flowers, memorial contributions may be made to St. John Catholic Church or Belmont County Animal Shelter by going to “TMCFunding.com”

Share your thoughts and memories of Charles with his family at www.beckaltmeyer.com

To the Family of Judge Knapp. I was overseas and just found out that he passed. Judge Knapp was a fantastic public servant and fair man. My thoughts and prayers are with you at your time of loss.

Judge Knapp was a dedicated public servant and great lawyer. It was a pleasure appearing before him and Belmont County is a better place because of him. May he rest in peace and his memory be eternal

I’m so sorry to hear this. He was wonderful to work for while I was employed at the Belmont County Courthouse where he served as Common Pleas Judge. I will cherish the memories.