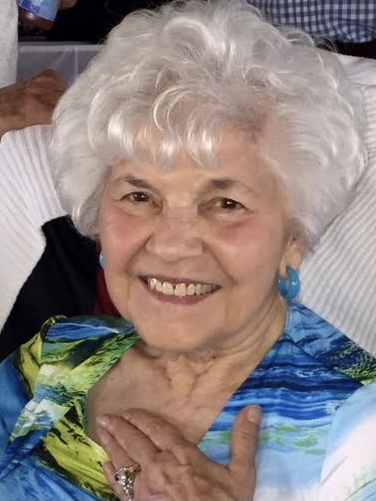 Clara Cicogna Presutti was born May 7, 1925, in Ripa, Italy, as the ninth of ten children to Abele and Olympia Cicogna.  She emigrated to the United States at age 9 on a steamer called the Saturnia.  Her most memorable moments upon landing in America were seeing the Statue of Liberty and experiencing chewing gum for the first time.

She worked in many homes as a private duty nurse, oftentimes at end-of-life, while working summers as a sales associate and assistant treasurer at Ohio Fireworks, the family company co-owned by Dom.

Clara and Dom were regulars at local auctions where they enjoyed collecting Imperial glassware and were active in the Imperial Glass Society of Bellaire.  They were also active in a local bridge club and often hosted the club at their home.  Clara served ten years as a 4-H advisor and volunteered to be the summer nurse at Piedmont Camp.  After her children left home, she was hired by Bellaire City Schools as a school nurse and health teacher for 12 years until she and Dom retired.

Clara and Dom moved to Venice, Florida, in 1987, where Clara continued her work as a Eucharistic minister at Our Lady of Lourdes.  She made rosaries to distribute to migrants and volunteered in an Alzheimer ward for 25 years, receiving many awards and accolades. At 85 years-old, she added “greeter at a senior center” to her volunteer activities. She also became a proficient china painter and exhibited her masterpieces.

Health required Clara and Dom to return to the Ohio Valley.   Her extroverted personality proved invaluable in numerous performances at the Welty Home, where she would shine with her expertise at sign language and as a narrator and singer.

Everyone who knew Clara will remember her brilliant smile, her endless energy, and her infectious optimism.  She told many, “You can do whatever you put your mind to!”

Clara died on March 4 in Wheeling, West Virginia, after being surrounded by many family members earlier in the day and after the rosary was recited.

The family would like to thank the staff at the Welty Home along with her caregivers:  Ann, Becky, Beth, Bev, Bobbi, Darlene, Kathy, Leslie, Linda, Mary, Mary Ellen, Michelle, Nancy, Renee, Terri, and Toni.

The family will be holding a private service at Bauknecht-Altmeyer Funeral Home in Bellaire.  Friends and extended family can participate in a mass at St. John’s Catholic Church in Bellaire at 12 noon Saturday.

Memorial donations to the Imperial Glass museum and St. John’s Catholic Church may be made by going to TMCFunding.com/TMCFunding.com

Share your thoughts and memories of Clara by going to www.bauknechtaltmeyer.com

Terriann, Ron, Mike, Carolyn and families,
We are sorry for the loss of your mom. I’ll always be thankful for the time she and I spent together until the covid shutdown. Her love of God, strong faith and passion for learning scripture was always present in her. She was a Joy to be with and a treasure of a woman. May God bless.

A woman of strength. A grandmother as well, She was such a pleasure to know.

A woman of great strength and a wonderful grandmother, a pleasure to know,

dear eric, we are so sorry for your loss.may god be with you and your family.in our hearts and prayers love don and carol cassidy

dear eric, we are so sorry for your loss in our hearts and prayers.love don and carol cassidy

Terriann,Clara was an effective school nurse at Gravel Hill who sincerely cared about the health of our students.She also was concerned about the amount of potato chips I would eat at times.I admired her for that personal concern.My prayers are with you.

A wonderful volunteer and member of the National Imperial Glass Collectors who made everyone she met at the Museum feel welcome
A fine lady!
I know she is continuing on in Heaven
and ….she is with her life partner !

Our deepest sympathies to all of your family, I was blessed to know Clara for many years she touched my heart with her smile , sweetness and all her giving to all , she will be missed dearly! She was wonderful. God received a special angel !

Our deepest sympathy to all of Clara’s family.
I thought the world of her. She was so kind and caring. All the qualities of a fantastic RN.
Her and Dom were so very helpful to the Imperial Museum in many ways. We were all blessed to have known her.
Joan & Joe Cimini

Our sympathies to the Presutti families