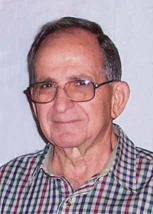 Ted was a retired co-owner of Fry’s Gravel Hill Food Market and a member of First United Methodist Church.

In addition to his parents, he was preceded in death by his wife, Jessie Lou Robinson Fry in October of 2013; a brother, William Fry; a sister, Laura Louise Kruger.

Friends will be received on Thursday from 2-8 pm at Bauknecht-Altmeyer Funeral Homes & Crematory 441 37th Street Bellaire, OH 43906 with funeral services being held on Friday at 11 am with Rev. Tom Jones officiating.

Memorial contributions may be made to First United Methodist Church by going to “TMCFunding.com”

Share your thoughts and memories of Ted with his family at www.bauknechtaltmeyer.com.

I am truly sorry to hear about the passing of your father. I recall fondly growing up in the old Gravel Hill neighborhood and feel fortunate to have had role models like your dad and mom. I hope your grief is somehow lessened in the knowledge that their memory lives on in each of us. My heartfelt condolences for you and your familes … Quenton Northcraft

Joann ,we are very sorry to hear of your fathers passing. He was a great man with a wonderful sense of humor prayers for you and family

Very sorry to hear of Ted’s passing, and he will be missed. Ted was a great guy, full of classy wit and good humor. Always had a smile and something positive and funny to greet you with. One of the greatest generation.

Ted was a great “good morning” man I always saw on Sundays when I attended church at First United Methodist Church in Bellaire. Like Ted, I grew up in our church and recently returned to it when I moved back home to retire. I will miss seeing him, but know that he is with his wife in heaven smiling down on those of us who will carry on in his stead. Rest in peace, Ted. My prayers go out to your family and friends.

Gary, Kathleen, JoAnn, Jimmy, and Families..
Please know that our thoughts and prayers are with ALL of you at this sad time in your lives. You surely know all of the fun times our families had together growing up and beyond. Your Dad was a rare jewel and wonderful man, we will remember him fondly. Hold tight to your many, many great memories for nothing can take them away….
Much love to all……..

Joann and Jim and family, sorry to hear of your dad’s passing. You are in our thoughts and prayers.

Jo Ann & family~~sorry for your loss~~you are in my prayers today! Lost my dad 2 weeks ago~~he was same age~~ I know how you are feeling! Love, Judi McGarry