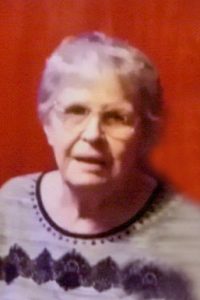 She was born March 10, 1934 a daughter of the late Clarence and Florence (Gibbons) Litman in Bellaire, Ohio.

Delora was a homemaker and a Methodist by faith.

She was a member of the South Bellaire United Methodist Church.

She was preceded in death by her parents, her husband, Robert Williams, two brothers Erman and Melvin Litman as well as a son, Robert Williams and a grandson Robert J. Williams.

Family and friends will be received at the Bauknecht Altmeyer Funeral Homes & Crematory 3900 Central Ave, Shadyside, Ohio 43947 on Friday June 21, 2019 from 11 am until time of service at 2 pm with Pastor James Lish officiating.

Memorial contributions can be made to the Seeing Hand Association by going to “TMCFunding.com”.

Share your thoughts and memories of Delora with the family at www.bauknechtaltmeyer.com

Sharon, I am so sorry to hear about your mother’s passing into our Father’s home. We often wonder what is waiting on the other side. Jesus and peace is our refuge. God bless you and your family.

Sharon, so sorry for your loss…..
Doesn’t matter our age , it’s still mommy.

Erman, Billy and the rest of the Williams Family: We are very sorry to hear of your Mom’s passing. You will be in our thoughts.

Sorry for your loss!!