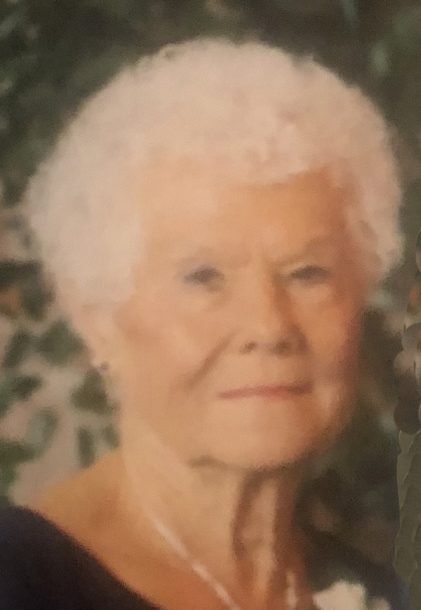 Married for 65 years, Delores is preceded in death by her loving and adoring husband, Owen. Their infant son, Michael Lee also
precedes her in death.

Delores is a 1955 graduate of Beallsville High School where she was a cheerleader and played the trombone. Delores is most remembered “Mrs. Hoffman,” a school secretary at Powhatan Elementary for 25 years. Delores also worked for the State of Ohio Department of Education and Labor Relations at Olin Matheson. She and Owen enjoyed their many travels including 22 cruises, boating on the Ohio River, trips to Alaska, Australia, New Zealand, Cuba, tropical ports of call and numerous “Buckeye Cruises for Cancer.” In 2008, Delores and Owen moved to The Villages, Florida. There she honed her bingo as well as casino skills, golfing, swimming, and took frequent day trips with Owen and
others. In 2021, Delores returned to Ohio, moving to Westminster Thurber in Columbus where she made many friends among the residents and staff.

The family is deeply grateful for the care Delores received through Ohio Health Hospice during her final months, especially from her favorite nurse, Bruce. We will always cherish her giving heart and welcoming kindness where a meal was always ready.

A funeral service will be held at Bauknecht-Altmeyer Funeral Home, Powhatan Point, Ohio Chapel, 186 Main Street on July 5 th at 11:00am with Fr. Dan Huesel officiating. Calling hours will be 10:00am-11:00am with the family present. Burial of Delores and Owen will be immediately following the service at Powhatan Cemetery. A luncheon follows at the Masonic Hall.

We were so sorry to hear of Delores’ passing. We were very good friends in grade and high school. We were cheer leaders together in grade school. She was a special person and always ready for a laugh. You have our sympathy at this sad time. So glad she was back in Ohio with family..

We are so sorry for your loss. Dave and I enjoyed going out to dinner and spending time at your parents home when we visited them at The Legends a few years ago. They were living a good life! Your mom was full of energy, smart, inquisitive and interesting. May perpetual light shine upon her.

Your mom was so energetic, smart, inquisitive and interesting. We last saw her, and your dad, at their home in Florida when we visited them at The Villages. They were living a good life! It was great spending some time with them. Dave and I are sorry for your loss. You mom was fortunate to have you watching over her during her last year.