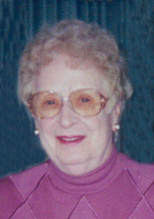 She was born  January 28, 1928 a daughter of the late Benjamin and Alverda (Smith) Dimmack in Bellaire, Ohio.

Dolores was a director for the Black Diamond Girl Scouts and a tour guide for Camm Tours.

She was member of the Pilot Club, Child Guidance Club and Wheeling Park Ice Skating Club. She was also member of DAR and on the Library Board.

In addition to her parents she was preceded in death by her first husband John H. “Jack” Rees in 1980 as well as her second husband Frederick G. Sechrest in 2004.

Dolores is survived by her sons John B. “Jack” Rees of Blacklick, Ohio and Robert L. (Debra) Rees of St. Clairsville, Ohio. In addition she is survived by two grandchildren, Megan E. Rees and Melissa D. (Joshua) Link as well as two great-grandchildren Nikita L. Cunningham and Joshua Allen Link.

Family and friends will be received at the Bauknecht-Altmeyer Funeral Homes & Crematory 441, 37th Street Bellaire, Ohio 43906 on Tuesday September 5, 2017 from 11am until time of funeral service at 1 pm with Pastor Phil Bliss officiating.

A private graveside service will be held at the convenience of the family.

Memorial contributions can be made to the First United Methodist Church of Bellaire, or to the Girl Scouts by going to “TMCFunding.com”

Share your thoughts and memories of Dolores with the family at www.bauknechtaltmeyer.com

So sorry for your loss. She was a favorite and always so fun.

Dear Jack, Bob, and Kaye,
Billie was loved by all that knew her. She was a wonderful person and always a lot fun, I always enjoyed her sense of humor. I never saw her without a smile. My deepest sympathy to the entire family. May God bless each of you and may you cherish the wonderful memories you shared with her.

Jack, Bob and family, Sorry to hear of your Mom’s passing. Prayers to you all. Jerry

Billie’s sense of humor was terrific and we always enjoyed DAR meetings! She never looked or acted her age… and THAT is a compliment. Enjoy Heaven, Billie!