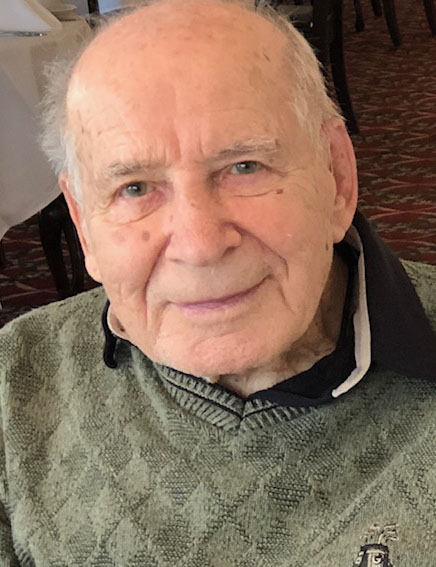 Dominick Presutti was a devoted husband of 73 years and a loving Father, Grandfather and Great Grandfather. Dominick Harry Presutti was born on September 14, 1925 to Dominic and Theresa Pinto Presutti. Dom grew up with fireworks in his blood along with the Washington Street gang who nicknamed him “Buzz”. After graduation from Bellaire High School, he was drafted into the service at the age of 18 and enlisted in the US Navy. Dom was assigned to the Destroyer USS Hyman DD732 and spent several years sailing the Pacific Ocean. He witnessed the historical raising of the flag at Mount Suribachi on Iwo Jima! While patrolling the area, his ship was attacked by Japanese Kamikaze planes which killed 11 and injured 40 American sailors.  One of the highlights of Dom’s service was on September 11, 1945 (just three days before his 20th birthday), when his ship liberated the Island of Pohnpei in Micronesia, raised the American flag and declared the Japanese occupation over.  In 1995, the Pohnpei government invited Dom and his wife, Clara, back to celebrate their 50th year of freedom from Japan. In 2010, Dom was honored as a Plank Owner for being a member of the Hyman’s first crew.

After discharge from the Navy, Dom followed the desires of his father, learning all there was to know about manufacturing and displaying fireworks and bombs made at the family-owned Ohio Fireworks Mfg. & Display Co. He became the secretary/treasurer and co-owner of the firm with his only brother, Veto.

On July 12, 1947, Dom married the love of his life, Clara Cicogna.  They enjoyed ballroom dancing, playing bridge and pinochle, entertaining friends and family, traveling, and working at the Ohio Fireworks business. They raised four children: Terriann, Ronald, Michael and Carolyn. Despite the young family, Dom and Clara would pack up the car and drive to various states which had contracted with Ohio Fireworks for celebration displays. Dom would shoot the entire show himself while on the road, and soon became known for his signature feat as the “man who rode the fire bicycle,” a set piece made of wood and flares which he would set afire and then jump on its makeshift seat to ride across the field!

Dom was a member of the BPOE in Bellaire and worked his way to Exalted Ruler.  He and Clara would frequently attend dances at the Bellaire Elks Club, often dressing in costumes for a sock hop or in matching costumes – like the Wizard of Oz lion and tinman or a Christmas tree and a dog for the Elks Halloween parties.  Dom became the oldest member of the Ohio River Valley Elks #231 in Martins Ferry. Dom and Clara attended many antique auctions in the Ohio Valley. They became big collectors of Imperial Glass, and helped create the National Imperial Glass Museum.

Even though the fireworks business paid the bills, Dom still wanted to fulfill his lifelong dream of becoming a school teacher. The first class he took was Public Speaking at the Ohio University Branch Campus in St. Clairsville.  That single course propelled him into becoming a full-time adult student.  He graduated with his BS in Education in 1968 from Ohio University in Athens, while his three oldest children were attending high school. Dom became an elementary and middle school teacher in the Bellaire School System at Key Ridge, Indian Run, and Gravel Hill.  Former students describe him as a “great teacher who kept the class in line” and he was “always kind…and had a soft spot for quiet kids like me.”   His favorite subject to teach was math.  Even during his later years at Good Shepherd Nursing Home, Dom could still manage numerical formulas.

Dom was an active member of St John’s Catholic Church in Bellaire, and practiced Christian principles throughout his life. Dom donated numerous college and high school scholarships, and gave his time and talents to the Bellaire community many times over, including for the annual Feast of The Assumption fireworks show.

Dom loved to reap bounty from the land, growing apples, peaches, plums, grapes, pears, and other garden items, and was particularly fond of tending his grape vines for wine making.

He retired from teaching in 1983, then he and Clara moved to Venice, Florida, where he continued his cultivation but this time with all citrus varieties. He returned to the Ohio Valley in 2017 and established residency at the Welty Home, attending daily Catholic Mass, saying the rosary, and playing bridge – along with his favorite weekly activity — attending Sunday family dinners.

He leaves behind eight grandchildren and five great-grandchildren. The most recent baby of four months is named Dominic, after him.

Due to Covid restrictions and concern for the family, a family-only service will be held.

Memorial Contributions may be made to the Alzheimer’s Association (www.alz.org) or the Imperial Glass Museum by going to TMCFunding.com. Share your thoughts and memories with Dom’s family at www.bauknechtaltmeyer. com. Arrangements by Bauknecht-Altmeyer Funeral Homes &  Crematory 441 37th Street. Bellaire, Ohio.

I am so sorry for the loss of your loving father may you all find peace and comfort during this difficult time. My the spirit of God travel with you all and guide you with peace. My love to all.
Kathi Marks ( Carolyn’s Richmond’s sister)

I want to share a fond memory of my (Great) Uncle Dom. In 1967 I was 9 yrs old living in Titusville, FL and it was our Centennial Celebration and Uncle Dom was hired to put on the fireworks show, it’s like yesterday seeing the bicycle lit up in fireworks going across the field and half way into the show all kinds of fireworks went of like a grand finale… the crowd was so impressed and when we all talked about the reaction of the crowd Uncle Dom laughed and said the boys set off a group of fireworks too soon that wasn’t supposed to happen:) we all got a good laugh from that. I was so proud to tell everyone my Uncle and his family put on the wonderful display, As the saying goes, when something is very meaningful to you it never leaves your memory.
I have a lot of memories and Uncle Dom, your smile and laughter will always be close to my heart.
My condolences, prayers and Love to all!
Chris Armendariz

An exemplary man who enjoyed life and was deeply in love with his wife. Gone from his earthly body, but rest assured, he is or will be back.

Clara and the rest of your family. You have our deepest sympathy. Dom was a kind man with a smile for everyone

Clara and the rest of the family you have our deepest sympathy. Dom was such a kind man with a smile for everyone

I had the privilege of meeting both your Mother and Father at the Welty Home when they can in for haircuts. Couple with true love and respect. Mr. Don was a soft spoken gentle man. He spoke of his family with much love. RIP

My condolences to your family.

I treasure the legacy left by Mr. Presutti at the Imperial Glass Museum. His contributions and support were and are vital. My prayers and sympathy to the family.

My sisters and I met Mr. and Mrs. Presuitti when they became residents of the Welty Home. They attended Mass at the chapel. Our uncle is Fr. Joseph Wilhelm; he quickly became very fond of them as well. We started calling them Mr and Mrs. Firecracker. We would see them at the events held there at the Welty. We always enjoyed them. We are so sorry to learn of the death of “ Mr. Firecracker.”

What a legacy he has left his wonderful family! Please accept my deepest condolences.