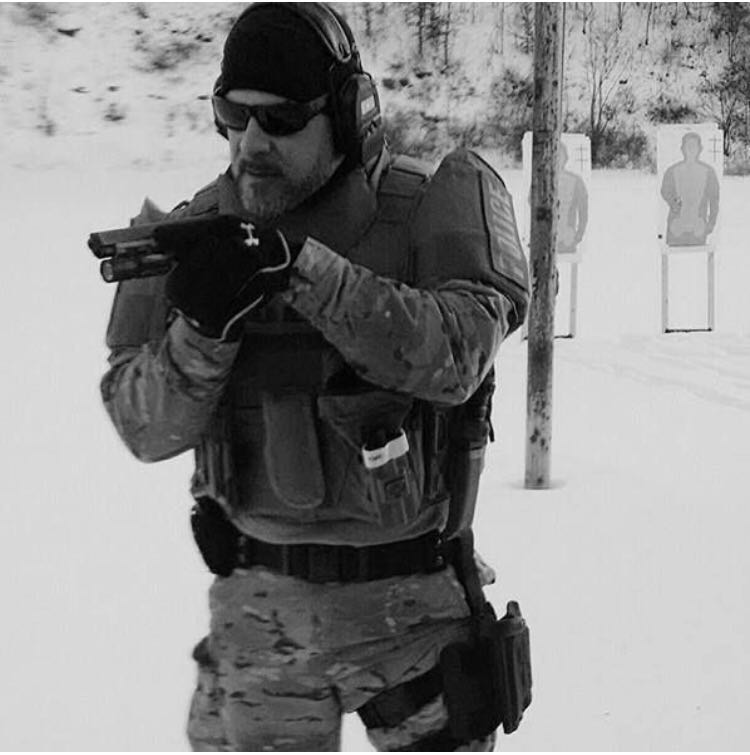 He was born in Bellaire, Ohio on December 28, 1970 the son of Donald L. and Judy McIntyre Buff.

Donnie was a training officer with the Belmont Correctional Institute in St. Clairsville, Ohio for over twenty-one years. He was a S.W.A.T. officer with the Cambridge Police Department and had been commissioned with the Belmont County Sheriff’s office for twenty years and the SRT Team through the Ohio Prison System. He was vice president of the Warthogs, Bellaire Chapter 41, Moriah Lodge 105 F & AM, and Sons of the American Legion Post 228.

Surviving are his daughter, Brynleigh Joy Buff of Glen Dale, West Virginia, his parents, Judy and Don Buff of Powhatan Point, Ohio, his uncles, David McIntyre of Akron, Ohio and James E. Buff of Lucasville, Ohio and his longtime beloved girlfriend Shayna Parsons and Stoney. Also many cousins and friends.

Family and friends will be received at the Bauknecht-Altmeyer Funeral Homes & Crematory 186 Main Street Powhatan Point, Ohio on Wednesday from 3 to 9 pm and Thursday from 1 to 8 pm where services will be held on Friday at 11 am with Pastor David Smith and Rev. C. Gregory Stone officiating. Interment in the Powhatan Cemetery full Police Honors conducted by the Belmont Correctional Institute’s Honor Guard.

Masonic services will be conducted at the funeral home on Thursday at 7 pm.

Memorial contributions may be made to either the Make-a-Wish Foundation, American Cancer Society or Vested Interest in K9’s, Inc. for Canine vests by going to tmcfunding.com.

To donate to the Make-a-Wish Foundation please CLICK HERE

To donate to the American Cancer Society please CLICK HERE

To donate to the Vested Interest in K9’s, Inc for Canine vests please CLICK HERE

Share your thoughts and memories with Donnie’s family at www.bauknechtaltmeyer. com.

The thoughts and prayers of our family are with you and your family in this time of sorrow. May God give you strength and comfort for the days ahead. Psalms 46:1

I am so sorry for your loss but remember it’s not good bye it’s see you later . Sending love and prayers your way

We send our sincere condolences.

Gone too soon. Remembered as a great guy.

Dave, Donna and family our sincere sympathy to you and all of your family.
With Love and Prayers, Kim and Pete

My thoughts and prayers are with you. So sorry for your loss and the loss Powhatan is going through.

Extending deep and heartfelt sympathy to you and your family. . . May the memories keep you going. . .

Condolences for the family. Sorry for your loss. May God be with you.

Breeze, you made everything you were around better because of your outgoing infectious personality. When you came in a room I knew it was going to be fun. I keep thinking about you jumping a ramp at vous on a tricycle and thinking what a nut! Your batteries never seemed to run out except on your bike! God bless you, Shayna and Bryleigh and all the Buff family and friends prayers to you for such a great loss. WFFW

To the Buff Family, Shayna andBrynleigh. I am so sorry to hear of Donnie’s passing. My condolences to you in this difficult time. Donnie was my trainer while I worked for Belmont Correctional. His training and expertise made me into the Corrections Officer I am today at Licking County Sheriffs Dept. He ALWAYS treated me with respect and like we were friends “forever” and whenever I needed anything or questions….he was there. Thank you for allowing me to experience and know a truly GREAT MAN…GOD bless you all.