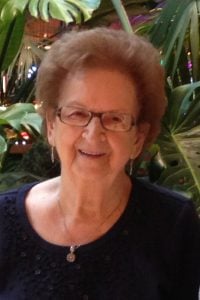 She was retired from the former Imperial Glass Corporation, Bellaire, OH and a member of St. John Catholic Church Bellaire, OH.

Preceding her in death was her husband, Walter T. Putinsky on September 5, 2004, two brothers, John Dober and Tony Dobrovich.

Family and friends will be received Sunday from 2-7pm at the Bauknecht-Altmeyer Funeral Homes and Crematory, 441 37th Street, Bellaire, Ohio. Funeral liturgy with Mass will begin at 11am Monday at St, John Catholic Church, Bellaire, Ohio with Fr. Daniel Heusel as celebrant.

I never really got a chance to meet her; although I heard so many stories from sam(my ex). I heard she was a loving mother and an amazing grandmother to sam! I’m so sorry to the whole family, I just wish I had the chance to know her like all of you did; you all will be forever in my prayers.

so sorry to hear of the passing of our dear dorothy.

She was always the kindest and sweetest lady who was special and always remember her and Walter as such a good looking couple who were so loved and respected. Truly will be missed and our prayers are with you….

Sharon, sorry to hear about your mom. You have my deepest sympathy
Patty

It is so difficult to lose a parent. Your mom was a wonderful, kind woman. She was always a good friend to my parents. We were all blessed to have had wonderful parents. Many good memories growing up in West Bellaire. Thinking of you guys- may God bless you at this difficult time

Dear Sharon and Alan and Family, I am so sorry to hear about the loss of your mother. She will surly be missed and never forgotten. She was so kind and sweet and I have so many good memories growing up visiting you guys in Bellaire, going to Cedar Point and such. I know how you feel as you know I lost my dad when he too was about the same age of 90 and those were good and mostly healthy years for the both of them which is pretty good now a days. You can also bet she’s up in heaven with your dad and the rest of her family. You are in our thought and prayers and if and when you come to town we would still like to see you. I am here if you need to talk. Much Love, Debbie

Dear Sharon, my sincere sympathy to you and the family.