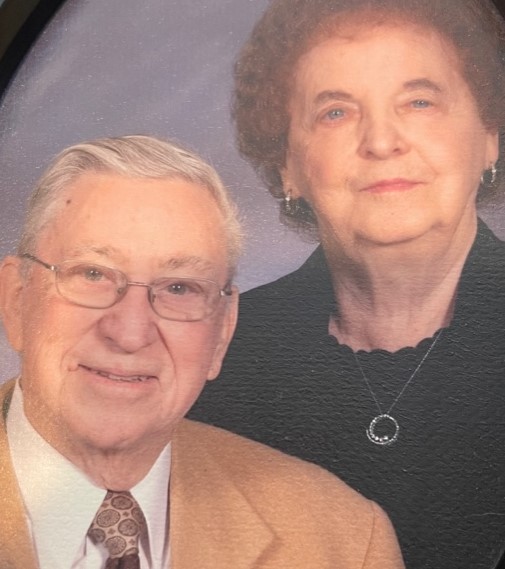 Dorothy Helene Ney of Bellaire, Ohio died Tuesday, January 14, 2020 at the Wheeling Hospital on her 76th wedding anniversary surrounded by her loving husband, Bob and family.

Dorothy was a 1943 graduate of Bellaire High School, where she and her husband, Bob were high school sweethearts and cheerleaders together.

She was married to Bob in the Chicago Great Lakes Naval Base in 1944 during World War II. She was in Times Square when the war ended and always joked that she could have been the woman that was kissed by the sailor in the famous picture.

While in New York she was a teletype operator. Upon her return to Bellaire, she was a homemaker, dedicated Mother and wife. Later in her life she worked as a clothing buyer for LS Good and Company and then the Bellaire State Store. Dorothy also was active in the former Child Guidance Club and was a Girl Scout Leader. Upon her retirement, she and Bob enjoyed traveling and spending time with her entire family, including playing cards and baking.

“ONLY A MOMENT YOU STAYED, BUT WHAT AN IMPRINT YOUR FOOTPRINTS HAVE LEFT ON OUR HEARTS.”

Family and friends will be received at the Bauknecht-Altmeyer Funeral Homes & Crematory 441 37th Street Bellaire, Ohio on Friday from 2 to 4 and 6 to 8 pm. Funeral liturgy with Mass will be celebrated on Saturday at 11 am at the St. John Catholic Church in Bellaire with Fr. Daniel Heusel as Celebrant.

Interment in the Holly Memorial Gardens in Pleasant Grove, Ohio.

Vigil services will be held on Friday at 7:30 pm.

Memorial contributions may be made to the St. John Catholic Church by going to TMCFunding.com.

Share your thoughts and memories with Dorothy’s family at www.bauknechtaltmeyer. com.

Dear Bob, We understand your hurt and pain. Having lost mom and dad to heaven we know. Mom and dad loved you, as well as the rest of our family. In time, the hurt will evolve into fond memories. Your mom’s spirit is in you. God Bless You.

Dear Bob, we understand how you feel, losing mom and and dad to heaven. Our mom and dad loved you as well as the remaining Bunfills. In time your hurt will evolve into fond and heartfelt memories, but her spirit will always be with you. Love,

Dear Bob, Our hearts understand, having lost our mother also, With time, thoughts of your mom will bring fond memories without much hurt Our mom liked you( as dad) as we do. You are a “good man Charlie Brown” (our mom’s phrase). May God bless you.
With love and heavenly blessings, the Bunfill family.

Sorry for your loss. Bob, your mom was always so kind. She raised an incredible family and will live on in all of your memories.

Bob,
I never met your mom, but I can tell how wonderful she must have been just by knowing you. We reflect the best parts of our parents thanks to the loving way they raised us. Take comfort in your memories as you grieve.

So sorry for your loss Bob, deepest sympathy

Emmy Lou, our heartfelt sympathy and prayers are with you and your family in this time of sorrow.

Thinking of all of you with hugs and prayers. It has been a lot of years since the Bellaire Lions Club steak frys.

Our sincere condolences to you all, Tweedie’s family. We will alway remember her as a kind and caring person, especially as a woman who loved her family. May God bless.

Worked with Tweetie at LS Good .. son, Bobby was altar boy at my wedding. Have known the family for may years. So happy that you all had so many years together. A special lady …. a special family. Sincere sympathy.