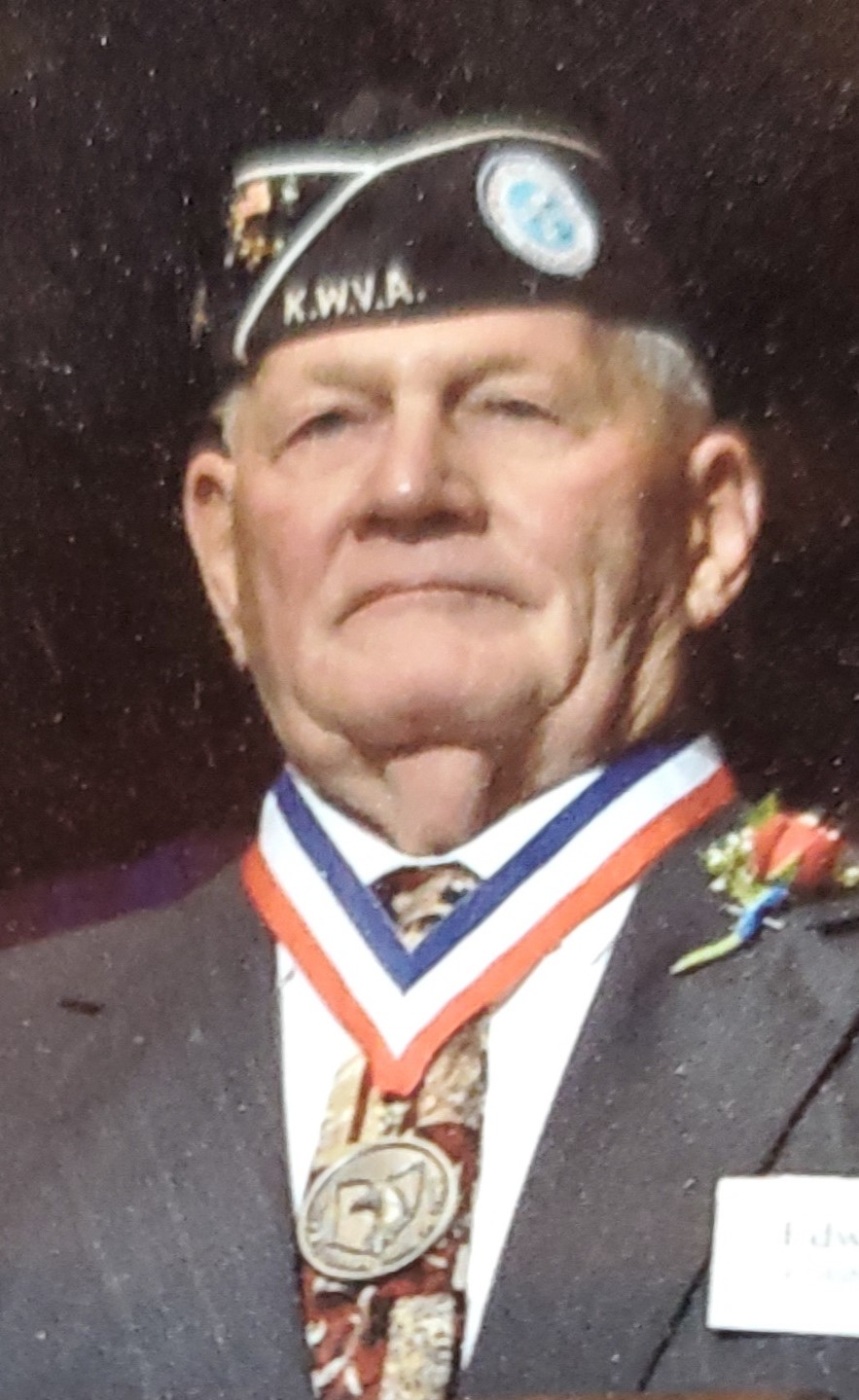 Born a twin, January 5,1934, in the Snowden Township, Pennsylvania, the son of Edward Sr. and Florence Gongaware Fellabaum

Ed was a retired PCS Engineer from Bayer New Martinsville. He spent previous years working as a Factory Sales Representative in the Instrumentation/Electrical business.

Ed was a Korean War Veteran of the United States Navy, where he served as an Aviation Electrician’s Mate Second Class (E5). He received the Combat Action Ribbon, Navy Good Conduct Medal, Korean Service Medal, Navy Occupation Medal (Europe), China Service Medal, Republic of Korea Presidential Unit Citation and Korean War Service Medal. In addition to his service in Korea, he served two cruises to the Mediterranean Sea and a brief tour in Cuba. His tour of duty included a ‘Round the World Cruise.

He served as Minister of the Bend Fork Christian Church. In retirement, Ed  was active in the Lay Ministry. He was recognized as ‘Lay Speaker of the Year by the UMC St. Clairsville District in 2003 and served the pulpit of a variety of area churches. He was privileged with delivering the Ohio Statehouse Prayer for the Ohio Senate in 2008.

Ed was a former drummer in the Powhatan High School Band, benefactor and active supporter of the Powhatan Elementary School Band and Choir. He was a Senior Piano Student of Mrs. Carole Matesick for several years.

He was actively involved with the Veteran’s Associations; serving as Past Commander of VFW Belmont County Council, Post 4719 Gahanna, Ohio, Post 55665 Powhatan Point, Founder/Past President of the Ohio Valley Chapter of the Korean War Veterans Association in 1993, co-founder of the Department of Ohio Korean War Veterans Association in 1994, past Chaplain of District 5 in the year 2000 and active with the Honor Guard for Military Funerals in the Ohio Valley

A lifetime Scout/Scouter since 1944, Ed served as Scoutmaster for 30 years and was a member of the local council Executive Board and several capacities in the local district, Akron Council and Central Ohio Council in Columbus. As a scouter, he earned the Scouter’s Key, Silver Beaver Class of 2000, and was a member of the James E. West Fellowship. He received the UMC Cross and Flame Award for his Lifetime of Scouting Youth Ministry in 2003.

In addition to his parents, Ed was preceded in death by his son,Kevin Fellabaum, three brothers, four sisters and three year old great-grandson, Mikey.

Family and friends will be received at the Bauknecht-Altmeyer Funeral Homes & Crematory 186 Main Street Powhatan Point, OH 43942 on Wednesday,  from 12 until time of service at 2pm with Bob and Steve Wharton officiating.  Interment will follow at Powhatan Cemetery, Powhatan Point, Ohio with Full Military Honors conducted by Powhatan Veterans Honor Guard and Belmont County Honor Guard.

In lieu of flowers, memorial contributions may be made to Cancer Gas Cards by visiting TMCFunding.com or by mail, 48397 Keylor Hill Road, Woodsfield Ohio 43793

Ed and Betty both hold a very special place in my heart. You were there for me during some tough times and always seemed to know what to say. I will miss our Ohio State football talks. You will be in my prayers.

Ed was a dedicated coworker and a man with a sharp wit. After all these years since we worked together in New Martinsville, Ed sent a Christmas card with a family update. Ed was one-of-a-kind and a true patriot. Ed, may you rest in peace.

May the peace & comfort of God be with you Betty & your family during this time of sorrow. But praise be to God for the assurance of eternal life that comes through know Jesus Christ as our Savior. Cheryl & I have fond memories of our time with you both while pastoring the Powhatan Nazarene Church. Ed was a great support/encourager. God bless.
Pastor Don & Cheryl Lawson

He was the greatest friend. Him and Betty attended our church and he loved to tell stories! I learned all about the camp and how all those streets got there name and how he disconnected the air conditioning because the women kept turning it down. They both were the sweetest people….I’m sure God has special plans for them both. My heart is sad today..

To a wonderful dad that was always there for me and guided me through the hard times … he taught me a love and respect for nature and to always be respectful of others …. you will always be in my heart and the values you instilled in me will carry me through the dark times …. until we meet again I will watch over and care for Mom …I was truly blessed that God chose you to be my Dad …

One of the kindest Uncles and souls I have ever met… and will never forget; your are with your family together now and will be forever loved and missed!

I will truly miss my Uncle Ed, who has been there for me, my entire life. He was a very kind soul and who always had time to listen to people.

May your memories of Edward Robbins Fellabaum, give you peace, comfort and strength…