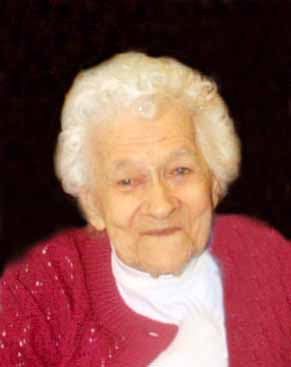 Elizabeth Mary Zbock, 103 went peacefully to be with the Lord on Thursday, December 28, 2017

Elizabeth was born in Shadyside, Ohio on November 1, 1914. She was the daughter of the late Mary and John Zbock.

In her younger years, Elizabeth worked at the Imperial Glass Factory in Bellaire, Ohio where she was raised and spent most of her life. She was a member of St. John’s Catholic Church.

Elizabeth was known for her sweet kind nature, simple ways of life and love for children, animals and birds.

She was preceded in death by her sister, Margaret “Marge” Janos and brothers, Frank, Andrew, Pete and Steve Zbock.

Family and friends will be received at the Bauknecht-Altmeyer Funeral Homes and Crematory 441 37th Street Bellaire, Ohio on Tuesday from 10 am until time of Funeral liturgy with Mass at 12 Noon at the St. John’s Catholic Church with Fr. Daniel Heusel as Celebrant. Interment in the Mt. Calvary Cemetery in Bellaire, Ohio.

Memorial contributions may be made to the St John’s Catholic Church by going to “TMCFunding.com”.

Share your thoughts and memories with Elizabeth’s family at www.bauknechtaltmeyer.com

May 13, 2015. I gained a new “Grandmom”. I live at Cumberland Pointe Care Center and I am only 51. I had requested a private room, when I first came, due to my age. It took @17 months, waiting for one to become available and for me to get to the top of the waiting list. The second day in the new room, I was wheeling down the hall and as I got to my door, she was at her’s. She was so worried about me and my leg being elevated. She stuck her head out the door, waved her hand to an aide to come over and help me. She was always so concerned about and worried that, everyone was getting taken care of properly. After a while, it became a comical event. Whenever I was heading towards my room or stopped to open my door, she would appear in her door, and point 2 fingers at me then to my door and say “In there. Get in there.” One day a gentleman I spend time with here and I were wheeling down the hall. As we came to my door, there she was in her’s. He turned and said he was going to his room and would be back. Well she was having none of that. She shook her finger at me and said “No boys.” Well at 60, he is far from a boy. This finger shaking went on for a month or two. Then shortly after Thanksgiving this year, he went past my room and said he would be back shortly. Liz wasn’t having it. She looked at me and said, ” Him get in there.” , pointing to my door. I said he was coming back and went in. I could still hear Liz talking about him coming in here. I just chuckled and got a cup of coffee, until I heard my nurse say, “Lizzy honey. This is not your room. It is (his) room. Come on up to your room.” Liz replied, ” No (he) in there. (pointing to my door)” I count myself lucky, to have had her touch my life and I have definitely been blessed by it