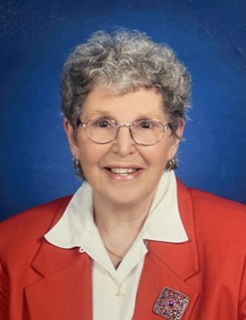 She was born April 23, 1924 in Armstrongs Mills, Ohio, a daughter of the late Ira and Grace (Sindledecker) Rhodes.

Evelyn was a member of the Shadyside Christian Church, Women’s Club, Over 50 Club, Red Hats, Democrat Ladies, and the American Legion Women’s Auxillary, and Owner of the B&E Bar and Grille.

Family and friends will be received Monday January 3, 2022 at the Bauknecht-Altmeyer Funeral Homes & Crematory 3900 Central Avenue Shadyside, OH 43947 from 2pm until the time of service at 6pm. Final arrangements will be held at the convenience of the family in Powhatan Cemetery, Powhatan Point, Ohio.

Memorial contributions may be made to the Belmont County Animal Shelter by going to TMCFunding.com

Share your thoughts and memories of Evelyn at www.bauknechtaltmeyer.com.

I’m so sorry to hear about Evelyn. We all had many great times and made alot of wonderful memories with her, Betty and Unc at B&E. Such a sweet lady. Prayers to the whole family

So sorry to hear about Evelyn’s passing.

Patricia penny and Bo. So very sorry for the loss of your mother. Prayers of comfort for all.

So sorry for your loss❤️❤️ Em