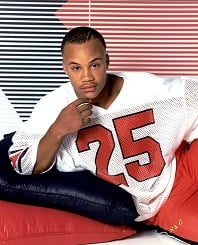 He was born October 28, 1971 in Wheeling, West Virginia the son of Eugene Burney and the late Judy C. Redmond Burney

Ezan was a former telemarketer and a Baptist by faith. He was an avid Dallas Cowboy’s, Ohio State Buckeyes  and Big Reds fan.

Family and friends will be received at the Bauknecht-Altmeyer Funeral Homes & Crematory 441 37th Street Bellaire, Ohio on Thursday from 2 to 4 and 6 to 8 pm and Friday from 10 am until time of services at 11 am at the Macedonia Baptist Church, 105 12th Street Wheeling, West Virginia with the Rev. Dr. Melvin G. Rippy officiating. Interment in the Greenwood Cemetery in Wheeling, West Virginia.

Share your thoughts and memories with Ezan’s family at www.bauknechtaltmeyer.

Ezan I will miss you and will never forget what a wonderful friend you were to me. Thank you for being the best Homecoming King ever!!!

Our deepest sympathy to the family of Ezan as I know he will be missed by all who knew him. May God comfort each of the family members and strengthen them each day at this difficult time. God Bless each of you as you face tomorrow.
Major and Idora Kimbro

Please accept my deepest condolences for our loss of Ezan, gone….but never forgotten. Rest In Peace “E”, Rest in Peace my Friend..

Had some of the best times of my life growing up with Ezan, there are just way too many memories to list…..Won’t ever forget you bro…..Rest In Peace 25

I was so sad to hear about Ezans passing. I watched Ezan grow up in the neighborhood. He always had a hug for me whenever I saw him. I’ll always remember that smile! God bless!!