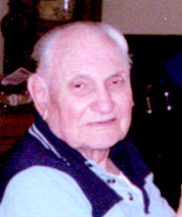 Frank A. Cieszeski, 92, of Powhatan Point, OH died Thursday, December 8, 2016 at Shadyside Care Center surrounded by his family. He was born July 3, 1924 in Neffs, OH a son of the late Adam and Mary Baranski Cieszeski.
Frank was a retired outside foreman for North American Coal Company # 1 mine at Powhatan Point and later # 3 mine at Dilles Bottom. He was a life member of VFW Post 5565, a Methodist by faith and proudly served in the US Marine Corp during WWII in the Pacific.
In addition to his parents, he was preceded in death by his wife, Arlene R. Jennewein Cieszeski in 1996; a daughter, Cathy Reyes; a sister, Jesse Robbins; a brother, Charles Cieszeski.
Surviving are two sisters, Elizabeth “Babe” Shultz of Shadyside, OH and Freda (Bill) Jarrett of Albuquerque, NM; grandchildren, Shane (Christine Hinerman) Cieszeski of Powhatan Point, April (Paul Wilczenski) Kraus of Garfield Heights, OH and Brock Reyes of Powhatan Point; great-grandchildren, Mikayla Cieszeski, Mikenzie Cieszeski and Chesney Necessary; and a 4th great-grandchild on the way due in January; several nieces and nephews.
Friends will be received on Sunday from 2-4 and 6-8 pm at Bauknecht-Altmeyer Funeral Homes & Crematory 186 Main Street Powhatan Point, OH 43942 where funeral services will be held on Monday at 1 pm with Lorna Knight officiating. Burial will follow in Powhatan Cemetery with full Military Honors conducted by the Powhatan Honor Guard.
Memorial contributions may be made to VFW Post 5565 (CLICK HERE) or American Legion Post 228(CLICK HERE) by going to “TMCFunding.com”
Share your thoughts and memories of Frank with his family at www.bauknechtaltmeyer.com

So sorry to hear of Frank’s passing. He was always kind and friendly to me–ever since I met him in the 80s. My sympathy goes out to you three kids (you will always be kids to me) and your families. God Bless and take care. Mrs. Nash

April, Brock, Shane and family, so very sorry for your loss. The loss of a parent is very hard. Semper Fi Frank have really missed our conversations.

We were fortunate to spend so much time with Uncle Frank during the last few years that he spent at the care center, along with Dad. You would rarely walk in that he wasn’t sitting out in the living room with a big smile and his cronies surrounding him. We always joked that he was the mayor of the care center. Mom always had a few bottles of root beer in her car for him that he appreciated so much. I am sorry that I won’t be in Ohio with all of you to celebrate his life but will keep you in my thoughts and prayers. He was definitely one of a kind and will be sorely missed.

May your memories of Frank A. Cieszeski, give you peace, comfort and strength…

We are so sorry for your loss. Keep your memories close to your heart.