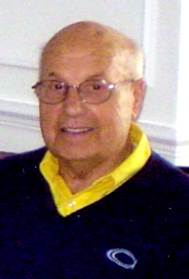 He was born June 22, 1920 in Clarksburg, West Virginia a son of the late James and Carmela Circosta.

Frank was owner and proprietor of bowling lanes in Bellaire, Bridgeport, Moundsville, most noteable The Riviera Lanes in Bellaire, Ohio. He was a member of the St. Mary Catholic Church in Shadyside, Ohio and a Shadyside High School graduate, Class of 1938.

In addition to his parents, he was preceded in death by his wife, Geraldine “Jeri” Mitchell Circosta on August 14, 2007; sisters, Rose Santarelli and Mary Vallelonga and brothers, Larry, Nick, Joe and Louis Circosta.

Family and friends will be received at the Bauknecht-Altmeyer Funeral Homes & Crematory 3900 Central Avenue Shadyside, Ohio on Tuesday, December 22, 2015 from 4 to 8 pm. Funeral liturgy with Mass will be celebrated on Wednesday at 10 am at the St. Mary Catholic Church Shadyside with Fr. Samuel R. Saprano, as Celebrant. Interment in the Powhatan Cemetery in Powhatan Point, Ohio.

Share your thoughts and memories with Frank’s family at www.bauknechtaltmeyer.com

COACH CIRCOSTA, SORRY TO HEAR ABOUT YOUR DAD, BUT HE IS IN A BETTER PLACE THAN WE ARE. MY DAD HAS BEEN THERE FOR FOUR YRS. NOW. GOD BLESS YOU AND YOURS.

Jay, Jim, Bob and family, I was blessed to have met Mr. Circosta, and to have been part of his care team. When I first met Frank he made me smile every day. I was thinking of him today and one of my best memories is of he and I along with a few other staff members singing “take me out tho the ball game.” I have several fond memories and stories I could share. It is so hard when we lose someone we love. Frank was a wonderful person and will be missed by many. Please know you are all in my thoughts and prayers as you and your families go through this transition. My wish for you all Peace. May God be with you all…

I am deeply saddened by the news of the death of your father. My thoughts are with your family during this trying moment. Your dad was so full of life and energy. I will never forget the special memories we made when I worked at Westwood Landing. I loved listening about his adventures, his stories, the love for his wife and the pride he conveyed when he spoke about his boys. Your father created some beautiful memories and I am blessed to been a small part of them. Please accept my condolences on the loss of your father.

Jim,Jay and the Circosta Family,
I am sorry for your loss. Frank and I met forty years ago on the golf course and we were friends from there after….. You will be in my thoughts and prayers. Mike

Jim, Barbara and the Circosta family – my condolences on the passing of your beloved father and grandfather. What a wonderful, full life he lived. May God bless you with the many special memories of your times together.

Our thoughts and prayers are headed your way to comfort you and bring you peace during this difficult time. My most recent memory of Mr. Circosta was the enthusiastic interest and support he showed toward Keith about his Monroe Mavericks basketball games. I so appreciated that he took the time to take one of our guys at MACO under his wing during his stay at Westward Landing. Many blessings to all the family.

My sincere condolences to the family of Mr. Circosta. Denny Albaugh

Thank you for all of the wonderful memories grandpa. You will be missed and will live in our hearts forever. May you finally rest in peace. We love you! Matt, Jayne, Mattie, & Jayke

To Frank’s family May God Bless you in this difficult time. I been in the bowling business the past 30+ years and Frank was one of my early tutors. I always admire Frank and loved the many memories of him and the Riviera. He has been in my thought a lot lately. You gave us a great place to make many friends. God Bless and Rest in Peace my friend.

to the circosta family ,sorry for your loss frank was a great gentleman,i worked for him in bridgeport in the 50,s he was a good boss in christian love the john morando family