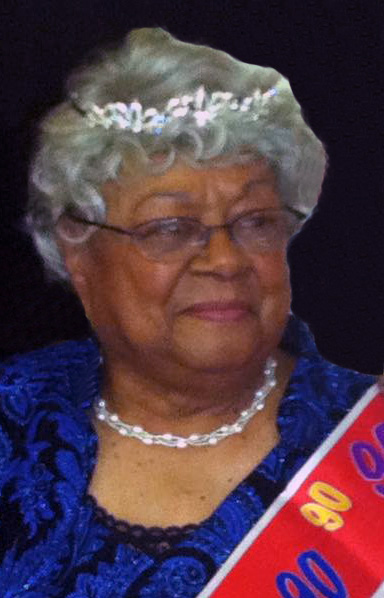 She was born in November 23, 1921 in Bellaire, Ohio a daughter of the late Major and Lena Williams Stovall.

She was a retired EKG Technician for the former Bellaire City Hospital and attended the Relevant Worship Center in St. Clairsville, Ohio.

In addition to her parents, she was preceded in death by her husband, Frederick L. Kimbro on January 10, 1987 and six siblings.

Family and friends will be received at the Bauknecht-Altmeyer Funeral homes & Crematory 441 37th street Bellaire, Ohio on Monday from 11 am until time of services at 1 pm with Pastor Mark Zelewicz officiating. Interment in the Holly Memorial Gardens in Pleasant Grove, Ohio.

Share your thoughts and memories with Geraldine’s family at www.bauknechtaltmeyercom.

I wish I had know her better she was my Grandmother’s sister Artress Walton. I am the son of Audrey the last time I saw her was at my grandmothers funeral 2003. My prayers and love goes out to my family.

I did not know Mrs. Kimbro, but from the photo tribute I could see in the smiles the great love that surrounded her. How very beautiful! May that beauty and radiance surround all of her family, especially Major and Idora, my friends for many years. God’s peace be with you all. Janis

Everything your loved one was, kind, honest, caring, wise, thoughtful and loving lives on in the hearts of all who knew her. My thoughts are with you during this time of sorrow.

I’m so sorry to hear of Mrs. Kimbro passing. She was such a lovely woman and full of the holy spirit. She always smiled. Please know that the entire family has my deepest sympathy. God has received a precious flower in His garden. She will be missed by many people. Continue to praise God for her wonderful life.

Sorry for your loss. You are in our thoughts and prayers

Kimbro Family,
My thoughts and prayers are with you all during this extremely difficult time. These are the moments in which you have to remember all the fun times and memories that you’ve shared or been a part of with this special lady. I’m praying GOD helps you all find your inner strength and peace. Always remember she was one of life’s blessings who was loved and will be missed by many.

I have lived my whole life up the hill from one of the sweetest woman that a God put on this earth.She will be missed here but angel with God.All my love cuz on the hill.

The human loss will never be calculated with Gerry’s passing because Mrs. Kimbro touched every life and person she knew. I so looked forward to the waves on her front porch and when I would see her at the grocery store, she would light up my life. She lived and left a legacy of love to her family and friends and I was so blessed to know her and love her. We can never forget this classy, kind, loving and gentle soul and no matter how many years may pass, I will still see her “sitting on that porch”. She was the epitomy of the word “class” and Bellaire has lost one of the best people ever born. Many prayers for all of her family in their loss of this grand old dame……….
Love, Steve and MaryJo (Zacchini) Kurko
Bellaire, Ohio

Aunt Gerry, I read somewhere that the most treasured gift you can give to another is a piece of your spirit. And, as a child who was blessed to spend my summers with you I am eternally grateful. Full of dignity, full of grace, and brimming with love, you will always be in my thoughts and prayers. “Look Freddy, he even walks like Donald!” I love you, Dennis

May your hearts be filled with lasting memories of your Mom. Please accept my condolences upon your loss. Keeping you all in prayer.