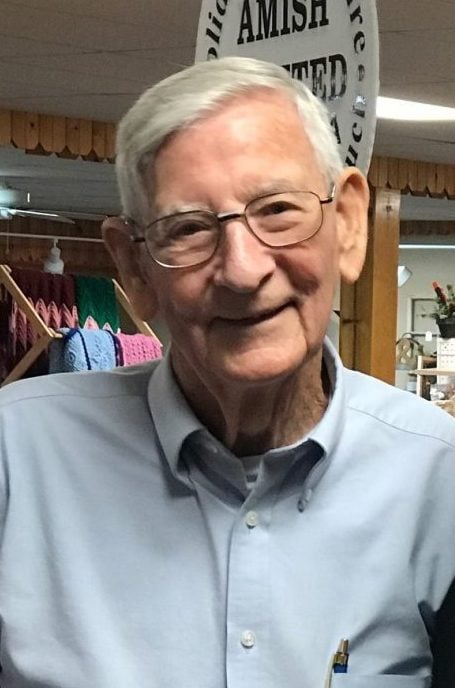 He was born April 4, 1930 in Shadyside, Ohio and was the son of Anna M. Williams McMahon and Charles W. McMahon.

Harold was retired from Columbia Gas and Transmission after 40 years of service. He was a member of Shadyside Church of Christ and a US Navy veteran. He was a 68 year member and Past Master of Weyer Masonic Lodge #541 in Centerville, Ohio. He was a member of Valley of Cambridge AASR.

Harold enjoyed breakfast with friends at Eat N Park in St. Clairsville, reading many nature magazines and being outside, especially if he could feed the birds and deer. He enjoyed keeping his and his neighbor’s lawns mowed and free of snow. He will be missed by his two cats Susie and Skeeter as well as the numerous neighborhood stray cats he tried to help.

Memorial contributions may be made to St.Jude Children’s Hospital, Shriner’s Hospital for Children, the Belmont County Animal Shelter or the charity of choice.

Carol & John and entire clan. You are so very fortunate to have had Harold for so many good years. Sat in Lodge with Him and still use the bird feeder he gave us so many years ago. Love and peace to all.

My deepest sympathies to Harold’s family. I’m sure you will miss his love and kindness. He was a true friend to so many and I’m glad I was one of them. God bless you all.

May your memories of Harold E. McManhon, give you peace, comfort and strength…

Dear Carol and Family, Ron and I were very sad to hear about your dad’s passing. Harold was such a wonderful neighbor. He did look out for his neighbors, mowing lawns and blowing snow. He was a wonderful friend to mom. I loved to hear his stories about feeding the deer. We will all miss him very much. Our deepest sympathy.

Carol so sorry to hear the passing of your father

Carol, Rose Lynn, Stacy and Family,
May God wrap his arms around all of you during this difficult time. Losing those we loved so dearly is the hardest thing ever and I don’t think we ever get over it. We just learn to live without them, keep them in our hearts forever and cherish the memories we have of them. May you all be blessed with your precious memories of your Dad and the love of him in your hearts!

Carol & family,
So sorry for your loss. Your dad was such a sweet soul, there’s no doubt that he is now resting in the arms of Jesus. We are lifting y’all up in prayer for comfort, strength & peace.
Love, Skeeter & Mac

Bill, Carol, Jim, Rose and Stacy, so sorry for your loss! He was a great man and father and will always remember his smile! My memories of him will always be in my heart! Love you all ❤️

Carol and family ,
My deepest condolences. I will always remember your father as a friendly man always dress neat was kind and always had a smile on his face. He was so special to many people and I am glad I had the opportunity to meet him. I’m also glad you were there during his last days, love you in Christ name.