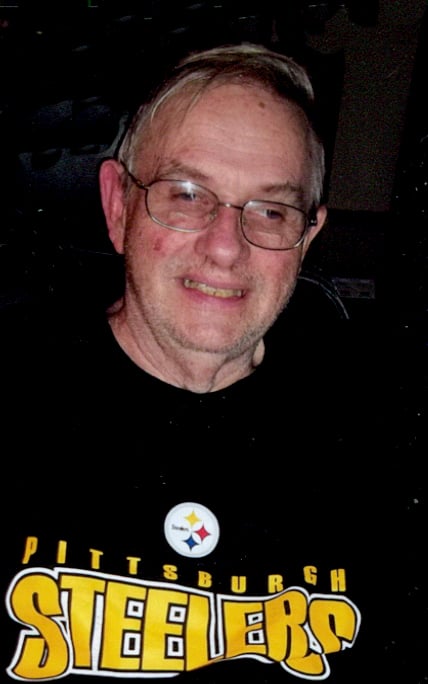 Irvin was a kind soul who never met an enemy.

He was loving and down to Earth and very solid in his mind and spirit.

Irvin was an avid Steelers and Pittsburgh Pirates fan.

He was a member of the Riverview Bible Church.

Irvin was preceded in death by his parents, a brother Robert Caruth and a sister Janet Frazier.

He is survived by his sister, Glenda (David) Guthrie of Bellaire, OH, and his brother Joseph (Paula) Caruth of Florida.

In addition he is survived by several nieces and nephews and many friends.

Family and friends will be received at the Bauknecht-Altmeyer Funeral Homes & Crematory 441, 37th Street, Bellaire, Ohio 43906 on Tuesday January 19, 2021 from 4 pm until time of service at 7 pm.

Burial will take place at Weeks Cemetery in Bridgeport, Ohio at the convenience of the family.

Memorial contributions benefit the Shriner’s Hospital by going to “TMCFunding.com”.

The family would like to extend a special thank you to the staff at Country Club Retirement Campus for their excellent care and compassion.

Share your thoughts and memories of Irvin with the family at www.bauknechtaltmeyer.com.

Harry it’s been simply a pleasure getting to know you over your time at CCRC. We have laughed and joked around over you being a steeler fan (still sorry for you ) you have always been great to people and awesome with family go rest high friend and when you see others up their tell them we said hello

Glenda AndJoe anf yoyr famillies sorry to hear of Irvins passing he was a great man always so friendly to me when I woukd come to your house he woukd be cooking snd ask me if i wanted something to eat i remembrr him almist running across Rt 7 to catch the bus the bus dtiver would always wait on him cause he knew he was gonna catch the bus.He was a kind hearted man he would hsve made a good husband for any women.His heart was full of Gold God got ankther good angel when he got Irvin.Msy he rest in peace.

Glenda and Joe! Sharlene called me over the weekend to let me know that Irvin had died. She had been keeping us updated, Glenda, every time you texted her. Thank you for doing that!!! What friendship you have with Sharlene after all these years. You were all very special to the Horner family and Grandma Rothacher loved you dearly! She thought of you all as her family! Irvin was such a kind and sweet person. He never let anything get in his way. I can still see him walking up the run and cross Rt. 7 to get the bus!!! Joe, I am glad that you had a safe trip from Florida. Please know that all of you are in my thoughts and prayers. I cannot imagine losing a sibling … and you have lost three … God Bless You all and please know how much I love you all!!!

Glenda and Joey! I am SO sorry to hear that Irvin has died. Sharlene kept me updated as to his progress and I appreciate your letting her know, Glenda. We all loved Irvin so much. He was such a kind, gentle sole and seemed like he was always on the go. I can still see him crossing Rt. 7 to get to the bus stop! What an amazing person! I know you all will miss him terribly! But in Heaven there is no more pain and suffering. He is reunited with His Father in Heaven, as well as his earthy parents and siblings! All of you were very special to the Horner family. Grandma Rothacher loved you all tremendously!!! Please know you are all in my thoughts and prayers. God Bless You All … during this most difficult time! Love to all of you!!!