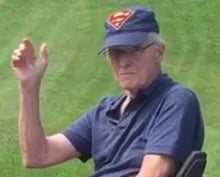 Bill was born September 12, 1944 in Bellaire, Ohio, a son of the late Daniel and Mary (Pyle) Columbo.

He was Catholic by faith. Bill retired from Ormet and was a lifetime member of the Bellaire Sons of Italy, a social member of the Bellaire VFW and a big fan of St. John’s Catholic School where his children and grandchildren attended. Bill was a loyal father and grandfather never missing an event or ball game, and a faithful friend. When asked by a doctor if he could do anything in the world, what would it be, Bill said he would go down town and see his friends.

Family and friends will be received Monday April 18, 2022 at the Bauknecht-Altmeyer Funeral Home and Crematory 441 37th Street, Bellaire, Ohio from 2-8pm where services will be held Tuesday April 20, 2022 at 1pm with Father Daniel Heusel as Celebrant. A Sons of Italy service will be held Monday at 7pm. Interment to follow in Powhatan Cemetery.

Share your thoughts and memories with Bill’s family at Bauknecht-Altmeyer.com

Bill did it his way..MY GREATEST DAYS WERE SPENT WITH BILL.DANNY AND JOHN,

So sorry to hear this news. Bill followed through with consistency and could be counted upon. An honorable person.

My husband Bob Evans was a friend of Bill since childhood. I have great memories of drag racing Sweet Pea! and many more. We remained friends our entire lives. God Bless Bill and his entire family.

Went all the way through school with Bill. Sorry for your loss. Rest in peace my Brother.

We last saw Bill at the Sons of Italy, among his friends. Lots of memories of younger days. He always had a friendly smile, ready to talk and have some laughs. We won’t forget him. May God bless him and all his family.

Bill and my brother Dan were best friends all through high school and then many years until Dan’s death. The girls were crazy about them both and they shared so many great times together. After Bill was unable to drive, my husband
Steve, took him around to the places he needed to go. He will be sadly missed and we extend our condolences to his family.

Bill was my high school sweetheart…..my first love….we shared so many happy times at Bellaire High School….he played football….I was a cheerleader….proms….study hall….school picnics…his black shiny Plymouth Fury…..that he drove too fast….we spent a lot of time together…..I have so many happy memories….went to his house every Sunday for a wonderful dinner. His Mother was a great cook…and his dad was so sweet. Fate sent us in different directions….REST IN PEACE….my first love.

Prayers for your family.

We are deeply saddened by Your loss, Many fond memories of growing up in the Valley. Sorry we can’t be there. May time heal your heart and memories comfort your soul.

We sure had a lot of laughs together, it was always a joy to see Bill. Robin and I will truly miss him. Our condolences to the family on the passing of our friend