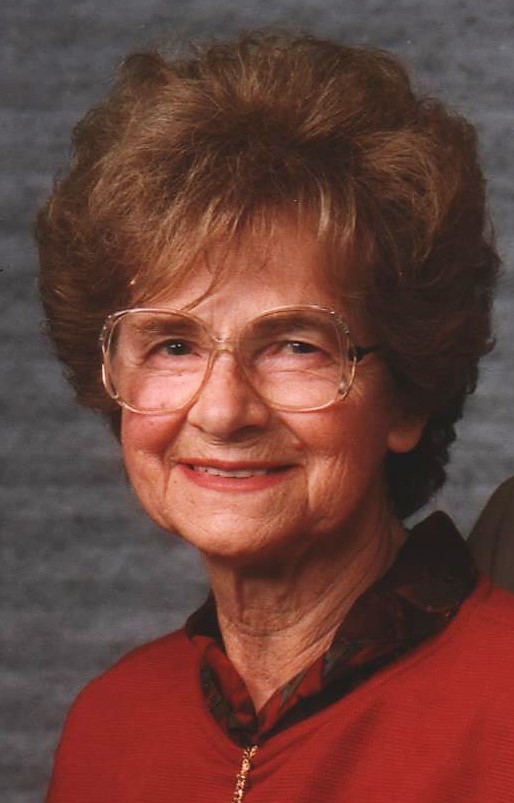 Helen S. Bundy Bowdish, 98, of Flushing, OH passed into the arms of her Lord, Wednesday February 22, 2017.
She was born December 22, 1918 in Harrisville, OH to a Quaker family, the youngest of eight siblings of the late Chalkley and Luella Hall Bundy.
She graduated from Olney Friends School in Barnesville, OH and Pasadena Junior College.
She met the love of her life, Byron in California and they and were married in 1939.
She worked as a “Rosie the Riveter “ for Lockheed Aviation while her husband served in the US Army in the Pacific theater.
Following WWII they moved to Flushing OH.
In addition to her parents and her husband of 65 years, she was preceded in death by her siblings: Wilmer, Ted, Arthur and Herbert Bundy, Bertha Binns, Edna Morlan, and Ruanna Wright.
Surviving are her children,
Brenda (Dan) Ponzani, St. Clairsville, Wilmer (Sally) Bowdish, Westerville, OH, Merwyn (Cindy) Bowdish, Lancaster, OH Leroy (Robin) Bowdish, TappanLake, OH, 13, Grandchildren and 19 Great Grandchildren and several nieces and nephews.
Always with her silent Christian strength she was an active member of the Flushing United Methodist Church. She was also a wonderful homemaker and mother and a valued employee of Ponzani Florist.
Friends will be received 3-7 PM Saturday at the Beck-Altmeyer Funeral Home and Crematory St. Clairsville.
Funeral Services will held Sunday at 2:00 PM at the Flushing United Methodist Church with Rev Al Hoder and Pastor Dan Ponzani officiating.
Interment at Holly Memorial Gardens will be held at the convenience of the family.
Memory flowers are welcome as well as contributions the Flushing United Methodist Church by going to “TMCFunding.com”.
Online condolences may offered to the family at www.beckaltmeyer.com

Dear Leroy and all the Bowdish family. Our deepest sympathy for the loss of your mother. We will keep you in our thoughts and prayers.

With loving sympathy to Helen’s wonderful family–what an inspiration her long life 0f devotion and service is! Her quiet and dependable service to her family, friends, community and Lord aaaand those with whom she came in contact–a tireless, talented worker whatever was required at that time. How blessed I have been to have known her and been her friend–sorry not to have been in closer contact these later years but she was always close in my thoughts and love.

Merwyn and Cindy: We are so sorry for your loss. I’m sure your mom saw many great and wonderful things happen with her family in her 98 years of life. Its hard when you lose someone close to your heart. You are in our thoughts and prayers.

We just wanted you to know that you are in our thoughts and prayers.

To the whole family of Helen Bowdish
Dear Cousins,

Although email seems like a very impersonal way to reach you, I do want to let ALL of you know that I’m feeling very close to you at this tender time and would love to hold each of you in an extended warm hug. I would consider canceling my responsibilities at church this Sunday and with my spiritual directors peer group in Fremont early on Monday morning if I could ask my daughter, Kim, to drive me to Flushing for Aunt Helen’s funeral. Unfortunately, she is in the middle clutter of packing to move and also has to work at the nursing home on Sunday where she is employed. Her life is chaotic at this point –having already sold her home here in Bluffton and her new place in Findlay is not yet accessible. I’ve been trying to help her pack this week and there is a lot yet to do.

I will always remember Aunt Helen as a gracious and oh-so-kind lady with a deep Christian faith. She, like my mother, lived what she believed –and I hold that with great respect. On a lighter note, remember her wonderful pies. She was such a good cook! Then on the very personal “Bundy family” level, I have always appreciated the fact that she was so supportive of Mother after Dad left us. I always knew how much Mother valued her relationship with Aunt Helen, but it was in Mother’s last year of life here that I read letters to her that she had saved and cherished. A couple of them were from Aunt Helen when she was still living in California. Those letters were deeply personal and based upon the faith that helped to see both of them through difficult times. Those letters are now valued and preserved in the Quaker Archives at Earlham College along with other important pieces of Bundy/Doudna history.

I know how much Aunt Helen’s church there in Flushing meant to her, and since I feel sure you’ll be inundated with flowers, plants, and other memorial gifts (i.e. chimes, robes, etc.) I have written a check instead for $100. which will be in tomorrow’s mail in loving honor and memory of Aunt Helen. May God bless and multiply it to assist with the church’s outreach or whatever other program Aunt Helen would want to support.

Peace and Joy to all as you reminisce and honor your mother and grandmother this weekend,

Dear Lee, Robin and Family —
May God’s peace and blessings be yours during this most tender season; and, may He give you many lovely memories, so that you may always have roses in December.

Sorry for your loss. The best friend that a bereaved family can have, is our Heavenly Father and God, Jehovah, “the God and Father of our Lord Jesus Christ and the God of all comfort”. He invites you to throw all your burdens on him in prayer and he will sustain you in your time of grief, because he cares for you.