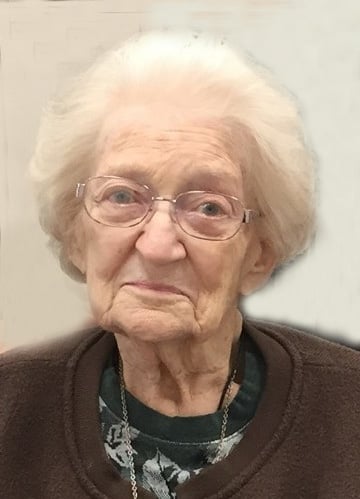 She was born March 18, 1925 a daughter of the late George and Frieda (Schafer) Baker in Bellaire, Ohio.

Iva was the secretary for Bellaire High School for 18 years as well as the treasurer for AARP in Shadyside, Ohio.

She was preceded in death by her parents, her husband, Charles Robson and her sister Georgia Lee Cross.

She is survived by her sons, Charles (Cindy) Robson of Medina, Ohio and George Robson of Sanford, FL.

In addition she is survived by her grandchildren Rebecca and Cristy Robson and her great-grand children, James and Nathan as well as several nieces and nephews.

Funeral service will be held on Tuesday April 30 at 11 am with Pastor Jerry Garloch officiating.

Share your thoughts and memories of Iva with the family at www.bauknechtaltmeyer.com

My heart felt sympathy goes out to all those who loved Iva. She was a beautiful person who could brighten any day. My contact with Iva was hampered by the distance that separated us, but when we spoke we erased the miles that stretched between us. God’s speed Iva Baker Robson, may you rest in peace. Amen.

It’s said that it take a village to raise a child. Growing up in Bellaire during the 60s and 70s was a great time. When you were at Bellaire high School there were people looking out for you. You could count on Mrs Robson for a smile and a kind word. Rest In Peace dear lady.

Dear Robson Family! Knew Iva …Ivy…thru your Dad Charlie and his parents. Then thru high school. Charlie and our Dad Albert DeBlasis were close as were your grandparents too. Used to go out to your Grandparent’s home. Ivy was the sweetest lady! I believe she had red hair and very attractive! A very kind Lady! So very sorry for your loss!

Prayers for both of you and your families. Hold tight to your many memories. I remember your Mother & Father fondly, as well as both of you when I would visit my grandparents up the hill from your parent’s house.

So sorry to here about your Mom,She was a great lady, Prayers to your familys