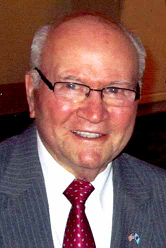 J. Edward Shutek, a devoted husband and loving father and grandfather, passed away peacefully surrounded by his family on December 23rd, 2017 at the age of 87.

He was a member and usher at St. Mary’s Catholic Church in St. Clairsville.

Ed was a graduate of Bridgeport High School and held certificates from the American Institute of Banking, the American Savings and Loan Institute and Ohio University. He also held a Diploma of the National Installment Credit School.

Ed was a 56 year veteran of the banking industry.

He served as President and Chief Executive Officer of Belmont Savings Bank until 1995 when he retired.

After retirement, he continued to serve on the Board of Directors until 2000 and served as an Advisory Director until death.

He was past President of the Ohio Savings and Loan League, Eastern Ohio Development Council of Belmont County and Bellaire Kiwanis Club.

He also served as Vice President of the Bellaire Area Chamber of Commerce and Big Brothers of Belmont Country.

He was a Veteran of the Korean War serving in the Army, member of both the Knights of Columbus and Lansing Sportsmans Club.

In addition to his career accomplishments, Ed was a dedicated Cleveland Browns and Indians fan and an avid golfer.

Family and friends will be received at St. Mary’s Catholic Church in St. Clairsville, Ohio on Saturday December 30, 2017 from 10:30 until time of Mass service at 11:30 with Fr. Chillog officiating.

Memorial contributions can be made to the Miracle of Life League or St. Mary’s Church building fund or by going to “TMCFunding.com”

Share your thoughts and memories of Ed with the family at www.beckaltmeyer.com

Dear John Edward, we did not know each other but the family Čutek in Slovakia bears you in mind. Our grandfather Anton and your father Jacob were cousins and loved each other. This obliges us to remember you and your family.

Rick and family,
My sincerest sympathies at the loss of your loved one. Mr. Shutek was very kind and I appreciate the opportunity he gave me to work with some people I still consider friends 20 years later. Praying for the peace of Jesus to be with you all.

Ed, my heart grieves with you and for you. You are a testament to your father. I only knew the little I did through you. But what I do know is that you are one of the finest men I have ever known. Your father’s light shines through your character and walk in this life. I have so admired the life you live, with a wonderful wife, Carolann, and your beautiful children. A family that is as a family should be. What a legacy your father leaves!

Ed, Carolann, and family, we were so sorry to hear about your Dad. He was such a nice man when he filled in for euchre. You are in our thoughts and prayers at this difficult time. With sympathy. Take Care. Pam & Dave

May your memories of J. Edward Shutek, give you peace, comfort and strength…