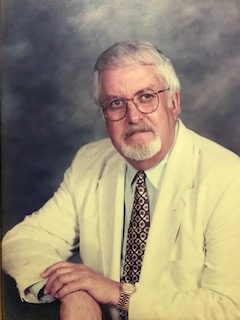 “Jim” was a pillar of the community who lived all but about a decade of his life in Bellaire. After his honorable discharge from the U.S. Army, where he served with distinction as a decorated Military Police Officer, Jim  returned to Bellaire and eventually landed in the financial services industry, retiring as a Loan Officer with National City Bank. Among his many community engagements, Jim was a member of the First United Methodist Church, Bellaire, a Past Master of the Masonic Ionic Lodge 438, Past Commander and Adjutant of Bellaire American Legion Post 52 and American Legion District 11 Past Commander, a member of Bellaire City Council, Bellaire Safety Director and a Board Member of Martins Ferry Housing Authority. All who worked with him in business, government, or service knew him to be a man of the utmost integrity, anchored by his beliefs of tradition, family, community and country.

In addition to his parents, he was preceded in death by his wife and life partner Margaret (Morris) Piatt, a sister, Lyda Hoffman, and two brothers, Arthur Dale Piatt Jr, and Roger Piatt.

Family and friends will be received at the Bauknecht-Altmeyer Funeral Home 441 37th Street, Bellaire, Ohio on Tuesday January 5, 2021 from 2pm until the time of service at 7pm. Masonic Lodge Service will be conducted at 6:30pm.

Interment in Greenwood  Cemetery will be at the convenience of the family.

Share your thoughts and memories with the family at www.bauknechtaltmeyer.com. Memorial Contributions may be made to Good Shepherd Nursing Home at TMCFunding.com

Jim and I were internet friends. We both served in the Army in the same outfit in Brooklyn Navy Yard and NYC, called the ‘Armed Forces Police’. Although Jim was five years ahead of me, I was there 1964-66. We traded e-mails pictures and memories online and I felt like I knew him forever. I only talked to him once on the phone. Jim was a great guy who I will never Forget

Jim was one of the best friends and person I have ever known. I had the privilege of working with Jim at the Peoples Bank in Martin’s Ferry. His daily good nature and our daily lunch talks are something I will never forget. He really helped me through a trying time in my life. My condolences to Jim’s family.

We are extending our love, comfort , and peace . He certainly was a pillar of his community and dedicated family man. Blessings…

Denise, Barry, Joshua and Jeremy, I was so sorry to hear about your dad’s passing. My deepest sympathies to you and your entire family. Wish you all comfort and strength through this difficult time. You have so many wonderful memories to help comfort you. What a beautiful Tribute Video. You are in my thoughts and prayers. Josie

Our thoughts, prayers and condolences to the family of Jim Piatt. He was truly a veterans friend.

Susan, Denise, and Jimmy, we are so very sorry for your loss. Your father was a wonderful man and good friend. We enjoyed many Friday evenings with your parents at the Legion. They shared happy memories of their married life. It was always a pleasure hearing their memories and knowing how proud they were of their children. You were blessed. Your father will be missed as your mother has been. Our thoughts and prayers are with you and your families in the days ahead. God’s speed Jim as you reunite with Margaret. Byron and Jean Thoburn

Susan, Denise,and Jim
I am so sorry for your loss. You are in my thoughts and prayers. Your Dad was a great guy and I enjoyed our times at the bank. He will be truely missed by all that knew him.

Really sorry to hear about Uncle Jim. He was someone I looked up to my entire life and was the epitome of integrity and success in our family. He was very much loved and respected by the entire community and he will be missed. Jim, Susan, Denise; my heart is with you and wishing you the best through this very hard time.

Susan, Denise & Jim, my thoughts and prayers are with you & your family. Your father was a true gentleman.

Jim, my condolence to you, Amy and the whole family. I wish you peace and loving memories. Holding you all in the light.