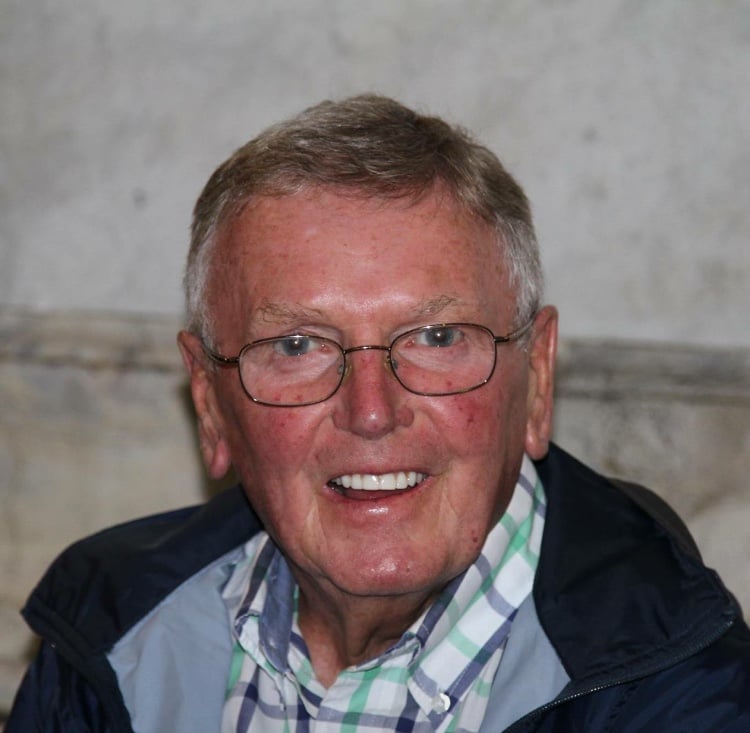 James Ellis Porter, 79, formerly of Shadyside and Anna Maria Island, Florida, died at home in Wheeling surrounded by family on May 3, 2018, after a long battle with Pulmonary Hypertension.

Jim was born in Shadyside on November 10, 1938, and was a 1956 graduate of Shadyside High School where he was a stand-out athlete in all sports, most especially basketball. Although he was on the smaller side, he was the first player in Shadyside history to score 1000 points in his high school career. For many years, he also held the track record for the fastest mile. He had a life-long love of sports and cheered for Shadyside, Ohio State, Cleveland Indians, and more recently Linsly where his grandchildren were students. He attended West Liberty State College, was an Army veteran and worked for 42 years for the Conalco Corporation and later Ormet. He was an elder in the Shadyside Presbyterian Church, a member of the American Legion, and a member of the Masonic Lodge #724 in Shadyside. Jim had a zest for life and took enormous pleasure in his family, his pool in Florida, good food, travel, fishing, golf and all sports. He enjoyed family trips to Maine and Europe, where he invariably ran into someone he knew. Jim was a master of nicknames, and every family member and friend had one assigned to him or her. Jim had many nicknames himself and was known as Jimmy, Uncle Buddy, Holmes, Shorty, Hon, Man, and Pop. Jim was a natural storyteller and had a keen sense of humor.

After he retired, Jim worked for Oglebay Park’s Speidel Golf Course and volunteered for Ohio Valley Parent Magazine and the Augusta Levy Learning Center, both organizations created by his daughter. He also helped
coach the girls’ basketball team at Shadyside.

Jim was preceded in death by his parents James and Florence (Ellis) Porter and his sister Judith Ruble.

He is survived by his wife of 54 years, Sue Ellen Podruzek, children Jim Porter of Tampa, Florida, and Kathy (Irvin) Shapell of Wheeling, and grandchildren Hannah and Samuel Fuller. He is also survived by a sister, Phyllis Bell, and brother, Richard (Barbara) Porter, both of Shadyside, Charlie Fuller, and many nieces and nephews. In lieu of flowers, memorial contributions may be made to Augusta Levy Learning Center @TMCFunding.com

Family and friends will be received, Sunday from 4 pm -8 pm at the Bauknecht-Altmeyer Funeral Homes and Crematory, 3900 Central Avenue, Shadyside, Ohio and again on Monday from 9 am until time of funeral service at 11 am with Chaplin Margie Carr officiating.
interment follows at Powhatan Cemetery, Powhatan Pt, Ohio.
Condolences may be expressed to the family at www.bauknechtaltmeyer.com

Sue and family, I am so sorry to hear of Jim’s passing. We sure had some fun times getting together on the hill. Jim was a great person ,he will be truly missed by many people. My thoughts are with all of you in this difficult time.

My Uncle, My Buddy, As kids Uncle Buddy always made us laugh and feel as important as any adult in the room. As adults his endless tales always had us on the edge of our seats. One thing for sure he put a smile on every face he encountered. Godspeed Uncle, JuJu is waiting. My condolences Aunt Sue, Jimmy Jay, Kathy, Uncle Richard, Auntie Phillys, and all the Shadyside extended family.

Seggie, Barb and family,
We are so sorry for your loss. May God comfort you and yours during this difficult time and bring you peace.
Jim and judie

So sad to hear that Jim passed away. I graduated with Jim from SHS in 1956. I moved to Shadyside in 1955 so I knew him for only our Senior year. Jim was a friend to everyone and so well liked. I send my heartfelt sympathy to his family and pray God be with them and comfort them at this difficult time.

Conalco memories, Jim always kept us laughing at the plant, especially during our lunches. If Jim was around people were laughing. I always enjoyed being around him . He helped make the last few years with Ormet bearable. R.I.P. Jimmy

Sue and family, sorry for your loss.

So sorry to hear of the passing of neighbor, Jim, all of you are in our thoughts and prayers, we are across the street if you need anything.

May your memories of James Ellis Porter, give you peace, comfort and strength…