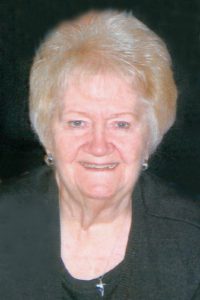 She was born Dec. 13, 1925 in Wheeling and was the daughter of the late Ross T. and Sarah Elizabeth Carnes.  Janet was a 1944 graduate of Bellaire High School. During her school days, she met her future husband, Walter C. Bauknecht Jr., when he asked her to attend a dance with him in the eighth grade. The couple wed in 1946 and were married for nearly 40 years until his death in 1985.  While Walter served in World War II, Janet attended Fairfax Hall, a finishing school for women, in Waynesboro, Virginia, where she studied music. She graduated in 1946. Upon his return, the newlyweds lived in Pittsburgh while Walter attended mortuary school.  They later returned to Bellaire, where they worked and raised their growing family. Janet was the former owner of Bauknecht Funeral Home. She was a friendly face at the front desk in the Bellaire location.  She was a member of the Bellaire Presbyterian Church, where she was a longtime choir member and a former elder. Janet also was involved in several clubs and community organizations, such as the local bridge club, the hospital auxiliary and Child Guidance club. She was a proud past supreme president of the Alpha Pi Sigma Sorority Delta Chapter, too. Her other hobbies were reading, playing solitaire and bowling.

As a mother, her children fondly recall trips with her to the family’s summer home in St. Clairsville, Ohio. Visits to Walker’s Homemade Ice Cream and Ebbert Farm Market were highlights of their visits. As a grandmother, she didn’t miss a school event, dance recital or other milestones.

In addition to her parents and her husband, Janet is preceded in death by her sister, Helen Carnes. She’s survived by three daughters, Patty (Steve) Valloric; Betsy (Donald) Russell Sr.; and Cathy (Sam) Sirianni, all of whom never hesitated to help with their mother’s care with grace and compassion during the last 11 years. Other survivors are two sons, Jon (Donna)
Bauknecht and Walter “Skip” (Patty) Bauknecht; three grandchildren, Sara, Justin and David; nieces and a nephew; and several great-nieces and nephews.

Family and friends will be received at the Bauknecht-Altmeyer Funeral Home, 441 37th St., in Bellaire, from 2-8 p.m. Friday. Services will be held there at 11 a.m. Saturday with Pastor Pete Walburn and the Rev. Christina Kestner officiating. Burial will follow at Greenwood Cemetery in Bellaire.

Memorial contributions can be made to Bellaire Presbyterian Church, Belmont Manor in St. Clairsville or Valley Hospice @TMCFunding.com

The family would like to thank Janet’s caregivers at Belmont Manor and Valley Hospice South Liza’s Place.

A lovely lady. Always a smiling face to greet ppl. My sympathies.

Patty et al. So sorry to hear of your mothers passing. She was always the laughing lady who had fun.

Skip and family, Please accept our deepest condolences on the loss of your Mom.

Dear Patty, Skipper and the rest of Bauknecht family, I am so sorry to hear of your mom’s passing. Our moms were involved in several organizations over the years of our childhoods. Growing up I felt like part of the “family”. My prayers & condolences are with you all. Love to all.

To the Bauknecht Family, I’m so very sorry for your loss, Janet was such a nice person both inside and out, she always went out of her way to ask me how the family was, as you know my grandmother worked cleaning the funeral home and helping your mom by babysitting the younger children. I remember being at your home nest to the funeral home playing with the kids while my grandmother worked. Your mom always treated me like one of the family. I will keep all of you in my prayers.

My deepest sympathy from my family to all the Baucknect family. No better people can be found. My heart and prayers are with you all. May God Bless !!!

Betsy and family. Your mother went to school with my mother Ruth Wade. I have spent a lot of time at your place of business
Your Mom was so naturally so sweet and kind to me and my members that have left us here. I love goes to each one of you because you could have just took care of the situation and never given the extra time to help ease my pain. I will never go anywhere else. If l can be of service just call me
Again my heart is with you and your family. God bless and prayers with you. Shirley Johnson-Mallory

Bauknecht family, Janet was a wonderful woman and always treated me with great kindness, she also had a great sense of humor. Thoughts and prayers for you all. God bless.