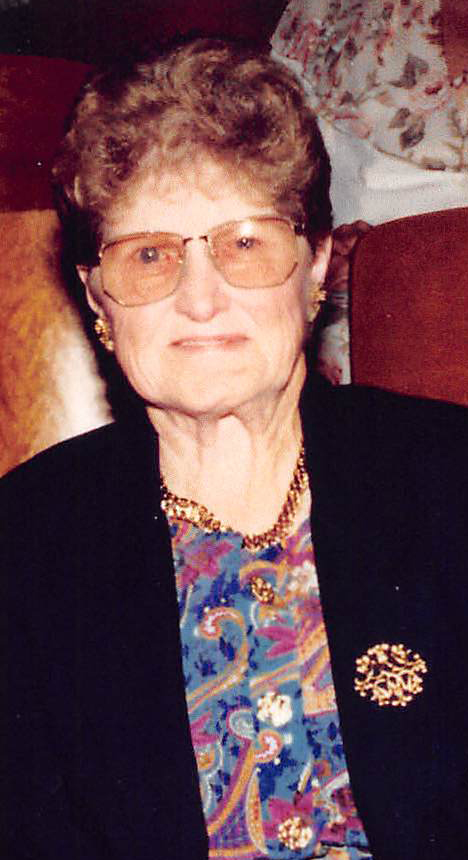 Jean E. Kanzigg Biles, 97, of Zanesville, passed away peacefully on Sunday, August 12, 2018, at The Oaks of Bethesda, Zanesville. Jean was born on Shannon Hill, Belmont County, near Powhatan Point, Ohio August 11, 1921, the only daughter of the late Wilbert and Mabel Brice Kanzigg. She lived on Shannon Hill near Powhatan until she moved to Zanesville with her oldest son. After two years, all three of Jean’s sons took turns taking care of her in their home until April 15, 2015 when she was no longer able to be taken care of at home. She then took up residence at The Oaks of Bethesda to be taken care of by a dedicated staff.

Jean was a faithful member of the Powhatan Church of Christ and attended the Zanesville Church of Christ when she moved to Zanesville. She was a member of the Powhatan Senior Center and a member of several quilt clubs when she was younger. Jean was a loving mother, grandmother, great-grandmother, and great-great-grandmother. She was Grandma Jean to many that knew her. Jean was a homemaker and baby-sat for several children in the Powhatan area. She was delighted when each of her two granddaughters had babies of their own, staying with them and helping with her new grandchildren. She loved to cook Sunday dinners for her family and grandchildren. Jean was a great cook and loved to bake, especially bread. Her grandchildren looked forward to her homemade noodles and sweet rice.

In addition to her parents, she was preceded in death by her husband, Leonard Biles; a great-granddaughter, Savanna Jo Biles; and a brother and sister-in-law, Rodney and Neva Kanzigg.

Friends and family may call from 4:00 – 8:00 P.M. on Friday, August 17, 2018 at the BOLIN-DIERKES FUNERAL HOME, 1271 BLUE AVENUE, ZANESVILLE. Friends will then be received at the Bauknecht-Altmeyer Funeral Home, 186 Main Street, Powhatan Point, Ohio from 10:00 – 12:00 P.M. Saturday, August 18, 2018 where services will be conducted at the funeral home by her three sons, Leland, Rodney and John at noon. Burial will follow in the Powhatan Cemetery being laid to rest by her husband and the love of her life, Leonard.

Memorial contributions may be made in memory of Jean to the Alzheimer Association c/o The Oaks at Bethesda, Alzheimer Walk Fund, 2971 Maple Avenue, Zanesville, Ohio 43701. On September 8, 2018 there will be a walk for Alzheimer’s at the OUZ Campus, Zanesville and Jean will provide shirts for all the  Oaks team members to wear.

To send a note of condolence, or to order flowers or comfort food: visit www.bolin-dierkesfuneralhome.com , follow us on Facebook, or call our professional staff at (740)452-4551.

Prayers, Thoughts and Blessing are sent to you in the passing of Jean, God Bless all of you.