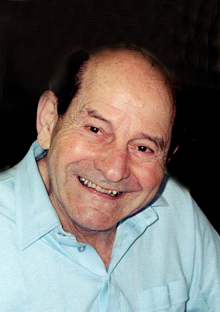 He was born November 25, 1927 in Bellaire, Ohio a son of the late John and Alice Abdow Gianangeli Sr.

Family and friends are invited to a memorial visitation and service Thursday from 10am until time of memorial service at 11am at the Bauknecht-Altmeyer Funeral Homes and Crematory, 441 37th Street, Bellaire, Ohio with Fr. Daniel Heusel officiating.

Patti and I express our deepest condolences on the passing of Uncle John. The memories I will carry with me for a lifetime are very fond and special of my time spent with Uncle John. I thoroughly enjoyed my visits up on the hill. I don’t think there was ever a time where he and I did not share a bottle of wine. Not sure how Aunt Carolyn felt about it, but I know Uncle John felt pretty good every time we finished a bottle. I will also treasure those many Christmas Eve’s we spent at the Sons of Italy with my family members and friends. Even when he could barely walk, he would want me to take him. Some of those last pictures we took together in the kitchen and around the Christmas tree at the club I will also cherish. In front of the lion that grandpa painted is where we took our last picture together. He was so proud of that painting, and was thankful that it hung at the club for all to see. Today is most difficult for me as not only did I lose a great uncle, but he is the last of the siblings of the seven great Gianangeli’s from up on the hill. I know that all the brothers and sisters are celebrating Uncle John’s life, and are toasting him as he joins them in heaven. God bless you all, and may the peace of the Lord be with you during this holiday season.