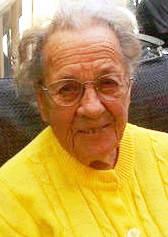 She was a Catholic by faith. In her younger years she was a factory worker at Marsh Wheeling.

Sis loved to play baseball with her grandsons, Justin and Luke and helped teach them to pitch. She never missed one of their baseball or roller hockey games.

She loved being outside working: growing flowers and trees. She was an awesome cook, a hard worker, a faithful daughter, a loving wife, a steadfast mother, and a one-of-a-kind grandmother.

In addition to her parents and grandparents, she was preceded in death by her beloved husband, Frank Paliswat on April 7, 2009. They were united in marriage on September 23, 1944, at St John Catholic Church in Bellaire. She was also predeceased by her brother, Walter Matthew Gmeindl on November 5, 1980.

Many thanks to her care givers: Barbara Brooks and Nancy Propst and daughter-in-law, Mary Catherine.

Family and friends will be received Thursday January 10, 2019 from 5pm-7pm at the Bauknecht-Altmeyer Funeral Homes and Crematory, 3900 Central Avenue, Shadyside, Ohio where funeral services will be held Friday, January 11, 2019 at 11am with Fr. Daniel Heusel officiating. Interment will follow at Union Cemetery, St. Clairsville, Ohio.

Even though I didn’t spend much time with Sissy,she was sweet and kind. She was loved and taken care of by some awesome people. Please accept my condolences.

My sincere condolances in passing of your mother. GOD bless & be with you all. Heaven has an Angel to watch over you.

I will always cherish the memories of visiting Aunt Sissy when I was little. We would swing with her on her garden swing. She had the most beautiful gardens. I specifically remember all of her roses. Every time dad would pass her house on our way to and from school we had to beep just in case she was sitting in the living room. And to her everything was a “whatchamacallit” 🙂 I know that she will be greatly missed. You guys are in my thoughts and prayers.

Josephine was one loving mother and grandmother and I am sure she will be missed by her family and friends. God Bless this family at this sad time! She was one in a million!