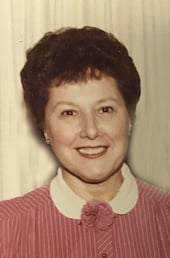 She was employed at the former Dan Alexander DDS of Bellaire, OH, a member of the Powhatan Presbyterian Church, the Powhatan American Legion and VFW Auxiliary.

Family and friends will be received Tuesday from 2pm-8pm at the Bauknecht-Altmeyer Funeral Homes and Crematory, 186 Main Street, Powhatan Pt, Ohio where funeral services will be held at 11am Wednesday with Reverend Steve Rice Officiating.

Snively & Vichich families, I am so sorry for your loss. Loved seeing Kata at all the Vichich parties on Broadview growing up. And then later at the July 4th parties in Powhatan. Would always stop and talk with her also when my Mom was in the Care Center. She was such a sweet lady. Thoughts and prayers with you all.

Terry & John,
So sorry to hear about the passing of your Mom. My thoughts and prayers are with you.

Coach Snively-
Sincere condolences for the loss of your mom.