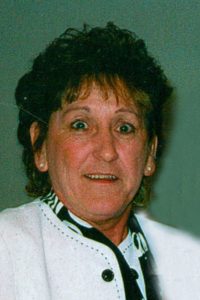 She was born February 3, 1950 a daughter of the late Robert and Dorothy (Wilison) Jeffries in Bellaire, Ohio.

Kathy was a homemaker and loved her grand children very much.

She was preceded in death by her parents, her brothers Donald and Terry Jeffries and a sister Tanya Thomas.

In addition she is survived by her siblings, Robert (Jennifer) Jeffries, Joyce Rhodes, Lucille DiBacco and Susan (John) Martin all of Bellaire, Ohio; as well as five grandchildren, Kayla and John Mirandy and Griffen, Jake and Luke Heatherington, one great-grandson Blaine Heatherington and several nieces and nephews.

Family and friends will be received at the Bauknecht-Altmeyer Funeral Homes & Crematory 441, 37th Street, Bellaire, Ohio 43906 on Wednesday January 22, 2020 from 12 pm until funeral service at 6 pm with Pastor Alison Taylor officiating.

Memorial contributions can be made to the American Lung Association by going to “TMCFunding.com.

Share your thoughts and memories of Kathy with the family at www.bauknechtaltmeyer.com.

Dear John John and family, I am so sorry for the loss of your beloved Meme. There’s no harder thing then to lose someone you love and adore. I’m very sorry

I’m so very sorry about Kathys passing. I’ll always have fond memories of all of our conversations we had on her porch, with Muggy and Sue and everyone up there that hung out when they all lived up by the tennis courts. Many prayers for you all

So very sorry, Hedy, on the loss of your sweet Mom. I always liked her so much. Prayers for all of you

Love you Aunt Kathy. You will be truly missed.

Bill, BilliJo, John, Johnny, Kayla & family so sorry for your loss. Our thoughts & prayers are with you all! God Bless

So sorry to hear about Kathy’s passing. Our deepest and sincere condolences to the family from Robert & Brenda Sellers.

So sorry for your families loss. Sending prayers and hugs.

So very sorry for your loss, please accept our condolences and prayers for your family during this difficult time

We are so very sorry to hear of Kathy’s passing. Although I never had the pleasure of meeting her, We know her sisters’ Lucille and Susan and Lucille’s children. Please know we send our prayers and thoughts to all who loved her, and especially to Bill, her husband.

So sorry for you loss, lots of prayers for you and your family ❤️