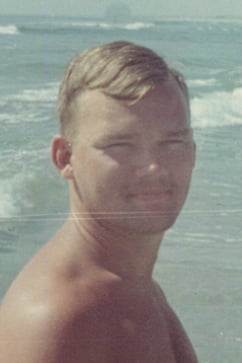 Pete was born July 14, 1947 in Bellaire, Ohio a son of the late Harry D. and Jesse Sanders Garrison.

Preceding him in death, in addition to his parents, were two sisters, infant Mary Louise Garrison and Florence Elliott.

Family and friends will be received Wednesday from noon to 8pm at the Bauknecht-Altmeyer Funeral Homes and Crematory 441 37th Street Bellaire, Ohio. Funeral liturgy with Mass will be 10 am Thursday at St John Catholic Church Bellaire, Ohio with Fr. Daniel Heusel as Celebrant.

To the entire Garrison Family,
Our prayers and thoughts are with you. Kenny was a wonderful person and never met a stranger. He will be missed by all who knew him. May God Bless each of you and give you added strength at this difficult time. Our prayers are with you.
With our sympathy,
Major and Idora Kimbro

Please know that when we think of “Petey”, we will remember his magnetic and infectious personality…….he never knew a stranger and had to be one of the best loved members of our community. Please know that through your tears and grief, we extend our love and prayers to all of you. His memory will always live on through all of you. God bless and keep you safe and well.

Dearest Jeanie and sons and extended family…….Pete was, without a doubt the most up-beat, up-lifting, friendliest and dedicated guy we had the pleasure of knowing. Through your tears and your grief, please know how loved you all are and when we think of “Petey”, we will remember his kindness and his smile………he was an “infectious”, magnetic person. God bless and keep you safe.

Jeannie,
Kathy and I send our condolences for a Marine and friend. We will miss “Pete” and hope his “Last Patrol” will find comfort.
Regards,
Jed and Kathy Klemm

Dear Jeannie and family, Our hearts go out to you in this time of grief. Pete was a terrific person and a true friend. I’ll never forget him. He is in our prayers.

Pete, I will always have the memories of our time together in Vietnam and Camp Lejeune and you wonderful visit with the children so long ago. Rest in Peace, my friend.

Pete, I will always have the memories of our time together in Vietnam and Camp Lejeune, and your wonderful visit when the children were young.

We are so sorry for you loss. We love Harry (CDS) and know how much he will deeply miss his brother. You are all in our prayers at this difficult time.

May your memories of Kenneth E. Garrison, give you peace, comfort and strength…

My thoughts and prayers are with the family of….. US Marine Vietnam Veteran, Kenneth E. Garrison, “A True American Hero” God Bless†

As I told Nancy, Jeanie you and the boys are in my thoughts and prayers. I have very special memories that I will cherish and also regrets that I will live with. May
God give you the comfort that you need at this time.