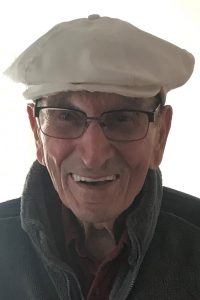 Lawrence P. Falbo Sr, 98, of Shadyside, Ohio passed away peacefully on Tuesday May 4, 2021 at the Kobacker House in Columbus, Ohio

He was born in Yorkville, Ohio on December 17, 1922, a son of the late Michael and Mammie Columbo Falbo.

Family and friends will be received at the Bauknecht-Altmeyer Funeral Homes & Crematory 3900 Central Avenue Shadyside, Ohio on Friday from 1 to 3pm and 5 to 7pm.

The Falbo family requests that masks & social distancing be observed.

Private services will be held at the convenience of the family with Rev. Seth Filburn officiating. Burial to follow in the Linwood Cemetery, Blaine Ohio with full Military Honors by the Belmont County Veterans Honor Guard.

A celebration of life service will be observed at a later date.

Memorial contributions may be made to the Shadyside Athletic Department by going to tmcfunding.com

He was my shop teacher. He was a great teacher and friend.

As a student at Shadyside High I remember being impressed at his ability as principal to remember every student, including myself, by name. He made a connection with everyone.

I am so sorry for yoir loss
Your dad and my mom were the greatest of friends since Yorkville kindergarten! My parents called him Lawrency. A 90 plus year friendship is a long time. He was sunshine and will truly be missed

To the Falbo family
I am so sorry for the loss of Mr. Falbo. He was a good friend to me and my family. My prayers and love go to out your family.

Falbo Family…so sorry for your loss…

I am very sorry to hear of Mr. Falbo’s passing. I used to see him walking on my morning drives to work and give him a little wave. May he now rest in peace. Sincere condolences to the family.

Larry, Becky and Dina,
What a swell dad you had. With a sincere wide smile and a twinkle in his eye, it’s difficult to really say goodbye. But remember too, he is now with our Father. and his smile is even brighter. and the twinkle in his eye is now a star. God bless you and your families.

Larry was a great guy, friend and teacher. He helped me out a lot, getting me started on my teaching career.

Mr. Falbo will be fondly remembered for his ever present smile and kind word for everyone he encountered. He greeted former students by name long after we graduated, which never ceased to amaze us. He had high expectations of students to do and be their best not just in the school environment, but in our community as well.
To Mr. Falbo’s family and friends, I extend heartfelt condolences and hope your memories of times shared brings you some comfort.