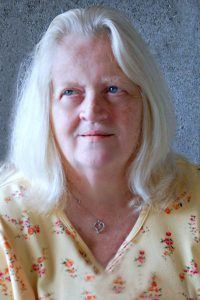 She was born April 24, 1952 a daughter of the late Donald and Etta (Kenny) Moore in Bellaire, Ohio.

Linda loved baking and dancing, she liked to crochet and listen to country music. Alan Jackson was her favorite.

Her grandchildren were her world. Her daughter liked to call her Princess.

She was a member of the Senior Citizens Center of Centerville, Ohio.

She was married to Ronald Baker on October 9, 1971 and spent 48 wonderful years with him.

Linda is survived by her husband, her children, Katina (John) Shreffler and Melvin (Susan) Baker of Powhatan Point, Ohio.

In addition she is survived by her siblings, Dennis (Joann) Moore of Powhatan Point, Ohio, Mary (Rodney) Brown of Clarington, Ohio, Melva (Terry) Duvall of Shadyside, Ohio and Brenda (Terry) Thomas of Benwood, WV; along with three grandchildren, Kelly Baker, Ian Eller and Matt Baker along with several nieces and nephews.

A memorial gathering will be held at the Powhatan Point Senior Citizens Center on Thursday October 17, 2019 beginning at 4 pm.

Memorial contributions can be made to the St. Jude Children’s Research Hospital or to Ronald McDonald House by going to “TMCFunding.com”.

Share your thoughts and memories of Linda with the family at www.bauknechtaltmeyer.com.

I JUST FOUND OUT TODAY THAT SHE PASSED. I WILL MISS OUR TALKS~
LINDA, YOU WERE A NICE PERSON AND QUICK WITH A LAUGH! THANKS FOR THE MEMORIES.

Miss you like crazy nana we all love and miss u. You will always be in our hearts and we will always have our memories love u nana ❤️

I am so sorry for your loss. I remember her well from our school days. And as a good family friend. My prayers are with the family.

I love you nan. You was like a mother to me. I will greatly miss you. You will be remembered in my heart.

Sorry for your loss. Linda was a great person and I loved her. She will be missed by all

So very sorry for the family, grew up and went to school with Linda cannot believe this happened to her. God Bless the family during this difficult time. Hugs and prayers

My heart goes out to my brother Ronnie and his family. I know your void is great. Prayer with time you will have some peace. Love You

This will be a private family memorial.

So sorry for your loss your she was a great woman

My heart goes out to Ron and his family.Great people