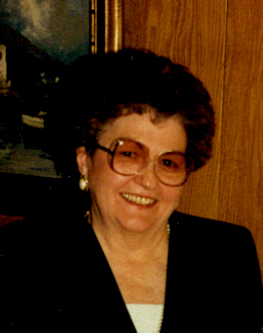 Lois was born February 25, 1929 in Jacobsburg, OH a daughter of the late Ernest and Hazel Riley Kriechbaum.

Lois was retired from the Belmont Savings Bank of Powhatan, PT, Ohio and a member of the Amity United Methodist Church where she sang in the choir for over 20 years. She loved gardening and Canning. She loved to sew and made beautiful quilts.

Preceding her in death, in addition to her parents, was her husband, George Edward Longstaff on June 22, 1971, a brother, Vernon Kriechbaum, a sister, Nancy ( Kriechbaum) Moore, and a granddaughter, Rebecca Sue Craig.

Friends will be received Sunday from 1pm until 8 pm at the Bauknecht-Altmeyer Funeral Homes and Crematory, 186 Main Street, Powhatan PT, Ohio. Friends then received at the Amity United Methodist Church in Steinersville, OH, on Monday from 10 am until time of funeral service at 11am with Reverend Theresa Bobot officiating.

In Lieu of flowers, memorial contributions may be made to Liza’s Place of the Amity United Methodist Church.

Brook….so very sorry for your family’s loss. Your mom was a wonderful woman.

My condolences to Susan and Family. I am so sorry to hear of your mother’s passing. I remember her working with Dad at the bank. And it was less than a month ago that she was at my mother’s funeral. I was so shocked to see that she has now gone to be with the Lord also. My prayers and thoughts are with you.

I remember visiting and playing in the yard when I was young and petting the horses.

I am the granddaughter of Sister in law – Connie Aitken, Chuck and Jo Ann Aitken oldest daughter. Mom and I send our sympathy to the family.

I remember visiting and playing in the yard when I was young and petting the horses.

I am the granddaughter of Sister in law – Connie Aitken, Chuck and Jo Ann Aitken oldest daughter. Mom and I send our sympathy to the family.

Sue, Tom, Connor and family, So sorry to hear of your loss. You spoke so often of you mom Sue, that I felt like I knew her even though I didn’t have the pleasure of meeting her. May she rest in peace and may perpetual light shine upon her. Prayers and thoughts go out to you all!

Mark, I am so sorry to hear about the passing of your mother. I have thought of you all everyday as a drive by your old home in Powhatan. Such good memories!

Brook and Laura
With heartfelt sympathy; my thoughts and prayers are with you and your family at this most difficult time.

We are so sorry to hear of your loss. Please know you are in our thoughts and prayers at this difficult time.

So very sorry for your loss. Lois was one of the nicest ladies I had ever met. Love and prayers.

Thinking of you and your family during this time.