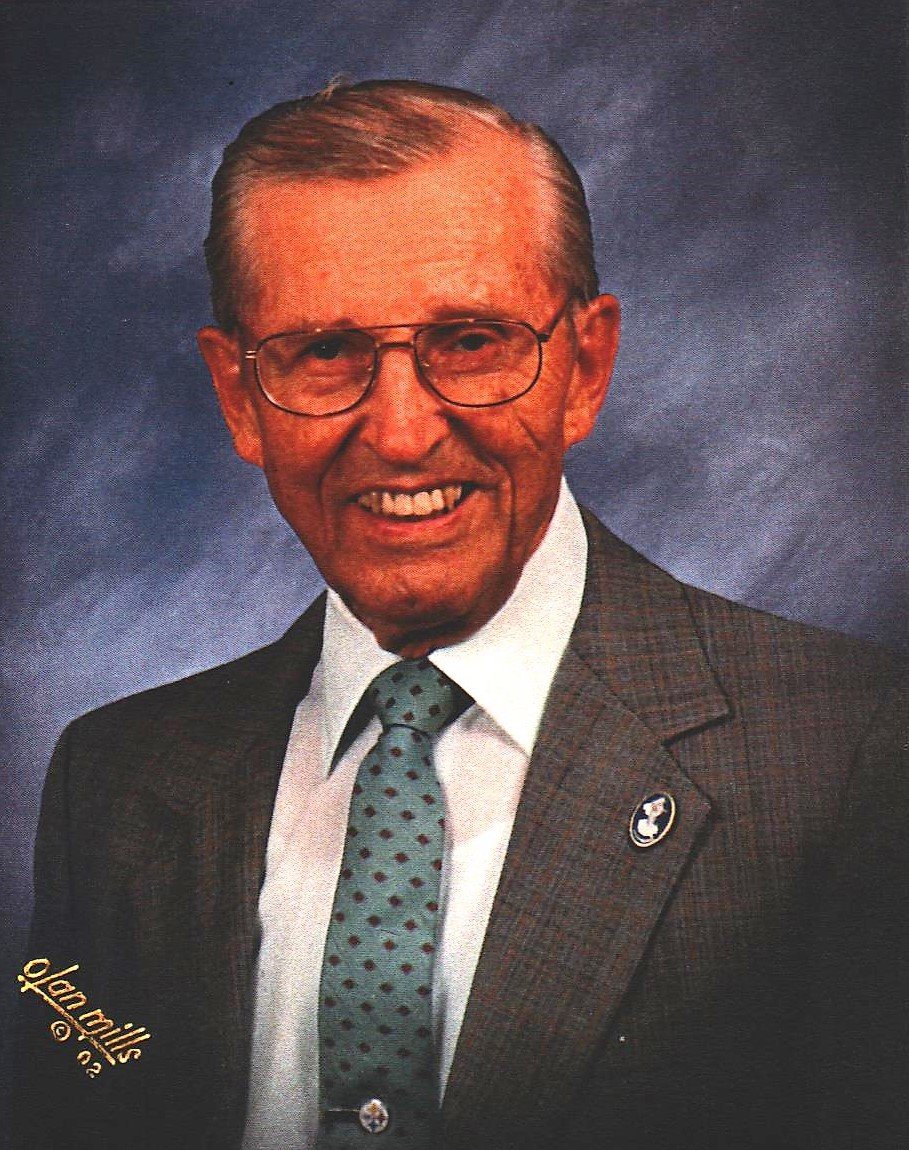 Jagucki, Louis F. 95 of St. Clairsville, OH passed away Monday, May 28, 2018 at Oak Creek Terrace in Kettering, OH. He was born on December 7, 1922 in Neffs, Ohio, son of the late Louis S. and Stella (Czekalski) Jagucki. In addition to his parents, Louis was preceded in death by Isabel (Velez), his beloved wife of 60 years, an infant daughter Patricia, baby sister Pauline brother, Edward J. Jagucki and nephew Barri Shank.

Louis graduated from Bellaire High School in 1941 and from Case Western Reserve University, Cleveland, OH in 1944. He enlisted in the US Naval Reserve in 1942 and was assigned to the US Navy V-12 Program at Case in 1943. He completed Apprentice Seaman training and received his BS Degree in Mechanical Engineering in 1944. He was assigned as Midshipman to the US Naval Academy at Annapolis, MD where he completed his Naval Officer’s training and commissioned Ensign in Dec. 1944. During WWII he served on the USS John Paul Jones DD230 and on the USS Orleck DD886 where he was promoted to LT. junior grade. Upon his release from active duty in 1946, he was assigned to the Naval Reserve Unit in Warwood, WV. In 1950 he was recalled to active military duty during the Korean War. He served on the USS Richard B. Anderson DD786 as Chief Engineer and promoted to LT. senior grade. His military service awards included: Combat Action Ribbon, China Service Medal, American Campaign Medal, WWII Victory Medal, Naval Occupation Service Medal, National Defense Service Medal, Korean Service Medal with four battle stars, Naval Reserve Medal, Republic of Korea Presidential Unit Citation Ribbon, United Nations Service Medal and Republic of Korea War Service Medal.

In 1946 he began his career in the steel industry as an engineer in steel pipe manufacturing. He was employed 31 years at Wheeling-Pittsburgh Steel Corp. in Benwood, WV in various supervisory and operations management positions: Chief Plant Engineer, Supt. Of Pipe Finishing; Warehousing and Shipping Facilities; Supt. Of Pipe Welding Mills, Primary Finishing and Galvanizing Dept.; and Plant Manager. After retiring in 1977 he founded Lodais Technical Services, Inc and provided engineering consulting services for steel pipe welding, galvanizing and finishing industry in USA, Canada and Mexico. He also had European assignments in Holland and Austria. He did volunteer consulting work assignments through the International Executive Services Corps in Monterrey, Mexico and Kingston, Jamaica.

He was a member of St Mary’s Catholic Church, St Clairsville where he served as Lector and Eucharistic Minister. He was a member of the Holy Name Society, Past President of Parish Council, Past President of St. Francis Society and the bingo committee. He was a Charter Member and Past Grand Knight of the Knights of Columbus Council 4243 and 4th Degree Member of the Knights of Columbus Commodore Jack Barry Assembly.

Family and friends will be received on Sunday from 2 to 4 and 6 to 8 pm at the Beck-Altmeyer Funeral Home & Crematory, St. Clairsville where the 4th Degree Knights of Columbus will provide an Honor Guard during visitation hours. A vigil service will be held at 2 pm. Members of the Knights of Columbus will conduct a Rosary service on Sunday. The Belmont County Council of the American Legion will conduct Full Military Honors at the funeral home on Monday at 9 am. Funeral liturgy with Mass will be celebrated on Monday at 10 am at the St. Mary’s Catholic Church, St Clairsville with Fr. Thomas A. Chillog, as celebrant. Interment will follow in the Union Cemetery, St. Clairsville.

Memorial contributions may be made to St Mary’s Church or St. Mary’s Central School by going to TMCFunding.com.

Share your thoughts and memories with Louis’ family at www.beckaltmeyer.com.

Rita, I am so sorry to learn of your loss. I worked at Benwood as a foreman for a short period (on loan from Martins Ferry WP plant), and he was a terrific person. He will be missed. You are in my prayers.

On his 19th birthday, December 7, 1941, his future changed and the USS Orleck DD-886 would be a part of his future for beyond what he could imagine. He would be a Plank Owner on the Orleck and His Lord and Savior, Jesus Christ, would keep him safe throughout his long life until the Lord received him into Eternal Life to be reunited with his beloved wife and family “in a moment, in a twinkling of an eye…” (1 Cor 15:52). He has laid aside his perishable and mortal body, his earthly image, and has put on his imperishable and immortal body, his heavenly image. He is in the Glory of His Lord and Savior.

“For the Lord your God is living among you. He is a Mighty Savior. He will take Delight in you with Gladness. With His Love, He will calm all your fears. He will Rejoice over you with Joyful songs.” Zephaniah 3:17 NLT

My sincere and deepest condolences to the family and friends of Louis. Denny Albaugh

Dear Lou, Rita and David,
Jenny and I were so sorry to learn of the passing of your wonderful father. As you will know, I have been blessed to know him virtually all my life. He was always such a pleasure to see….always had a good word and a kind thought. He was a great father, spouse and friend to all who knew him. I will always carry his memory in my heart. I am also saddened that we could not be with you at his funeral. We moved several years ago to Columbus and I have to be out of state later tomorrow. We wish we could be with you. Please accept our deepest sympathies……if you are in Columbus, please give us a call……
Ed and Jenny Sargus

I always remembered Cousin Louis as being a snappy dresser, straight shooter and an officer and a gentlemen. I loved it when he asked me to be his friend on Facebook. He adored his family and extended family. He had a beautiful soul and touched the hearts of many, he will be greatly missed. You guys will be in my thoughts and prayers.

May your memories of Louis F. Jagucki, give you peace, comfort and strength…