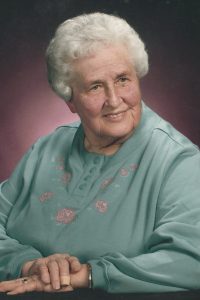 She was born July 9, 1927 a daughter of the late Edward and Mary (Meeker) Fitch in Bellaire, Ohio.

She was a school teacher and coach for the Bellaire School District.

Lucille was a longtime Bellaire, Big Reds sports fan; 1952 member of the WV Tournament State Softball Team – the team consisted of members from Moundsville and Limestone, WV – they were named the “Lassies”.

She was a lifetime member of the Bellaire Alumni and also served a term on Bellaire City Council.

She is survived by her nephew, John Fitch of Sebring, FL, niece Sandra Wallace of Bellaire, nieces-in-law Rosalind Fitch and Rita Fitch both of Bellaire and her cousins and caregivers Dan and Chris Farmer.

A memorial service will be held at a later date.

Share your thoughts and memories of Lucille with the family at www.bauknechtaltmeyer.com

She was an awesome coach and teacher. She always spoke to me and never forgot me as a student. I will remember her always. may she rest in peace.

To all of Lucille’s extended family,
She was one of a kind.

I loved having Miss Fitch for my coach for 3 years. We were undefeated every year. It was a great source of pride. She never made us feel like we did anything wrong, and always encouraged us. Great memories from summer basketball, as well. Miss Fitch was way ahead of her time. A beautiful soul.

Grand lady. enjoyed working with her, She was ultra successful as a coach and a better person!

Miss Fitch was a thoughtful, personable teacher who never seemed to forget her students. She made everyone feel important in her classes.

Miss Fitch was a woman’s coach that was ahead of her times! She should be remembered as a person that helped girls and women sports get recognized and ultimately championed title nine. She was a great basketball coach and started women’s track at Bellaire. I still run half and full Marathons and many times thought how she made me aware of how competition guided many of my life choices. Class of 68. Test in Peace!

Miss Fitch was the best….she was my basketball coach, my gym and health teacher and she was always a friend when you needed her. She was a lady that I looked up to and her opinions always mattered. She made me a better person. RIP dear heart…you will always be remembered…

A beautiful friend. I will cherish your memory and our visits. Until we meet again sweet angel!

What a wonderful person who meant so much to so many! She was my cheerleader advisor.!She was a legend in her own times