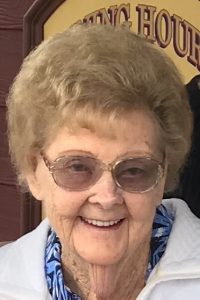 She was born October 26, 1929 in Cresap, WV, daughter of the late Francis and Esther (Powell) Farley.

Lo was a homemaker and a Christian by faith, a member of the Eastern Star, Captina Chapter 489.

In addition to her parents she was preceded in death by her husband, Lloyd H. Arnold; daughter, Esther Jean Miller; two brothers, Tommy Farley and Francis Farley; and grandson, Charles L. Miller.

A graveside service will be held at Powhatan Point Cemetery on Tuesday September 14, 2021 at 1pm with Zach Miller officiating.

Memorial contribution may be made to Senior Services of Belmont County by going to TMCFunding.com

What a wonderful lady. Aunt Lo you will truly be missed such a blessing to everyone who knew her. Denita we love you and are so sorry for the loss of your grandmother. We always say their is no love like a grandma’s love!

Sorry for your loss our prayers are with you