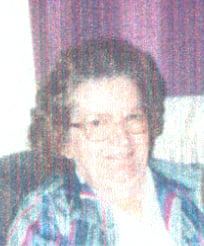 Mary A. Murray, 93, of Bellaire, OH died Wednesday, April 20, 2016 at Wheeling Hospital. She was born December 3, 1922 in Newport, OH a daughter of the late Herbert and Edith Masters Lightfritz.
Mary was a homemaker and a Protestant by faith. She enjoyed playing bingo and spending time with her grandchildren.
In addition to her parents, she was preceded in death by her husband Clyde Boyd Murray, Jr. in 1972.
Surviving are two sons, James Lewis of Chicago, IL and Robert Murray of Bellaire; two sisters; a brother; four grandchildren and six great-grandchildren.
There will be no visitation or services.
Arrangements by Bauknecht-Altmeyer Funeral Homes – Bellaire.

My condolences to the family of Carolyn Gay Justus. At this time words that truly comfort is hard to think of, but the Bible has many comforting words, such as found at Revelation 21:3&4 also Isaiah 25:8. you can read these scriptures online at http://www.jw.org

My condolences to the family of Carolyn Gay Justus. The pain of Death can be overwhelming no matter what age. The Bible provide comfort during difficult times, we are promise at 1 Corinthians 15:26 that very soon Death will be brought to nothing” Then we have the prospect of being reunited with our loved ones right here on earth. (John 5:28&29) without any wickedness (Psalms 37:10&11). I hope this bring you comfort and Hope. You can read these scriptures online at http://www.jw.org