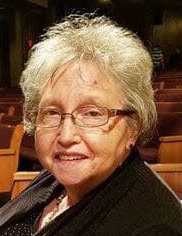 She was born November 11, 1943, in Barnesville, Ohio a daughter of the late Harold and Mary( Hughes) Adkins.

She was a Methodist by faith, attended the Amity United Methodist Church Steinersville, OH.

Preceding her in death was a sister, Nancy Cunard.

Mary loved her grandchildren, loved a good bargain while shopping and was a huge Scotty McCreery fan.

Family and friends will be received Thursday from 2-4pm & 6-8 pm at the Bauknecht-Altmeyer Funeral Homes and Crematory, 186 Main Street, Powhatan Pt, Ohio where services will be held at 11 am Friday with Pastor Jeffrey Lewis officiating.

Memorial contributions may be made to Juvenile Diabetes Society or the Susan Koman for the cure @TMCFunding.com

Mary Lou was my neighbor for many years. She taught me so much about couponing & how to save on just about everything. I still have the Betty Crocker cookbook she gave me when I was 16 yrs old. Such a wonderful lady that will truly be missed by our family. Prayers & comfort to her family.

I cared for Mary towards the end. Mary and I bonded very easily and became like family. She called me her angel and I was honored to be able to care for her. She was a wonderful, beautiful lady that will always have a special spot in my heart just for her

Sending prayers your way and know how much we love you. Chet, Sue & family

My truest deepest sympathy and prayers for the family. She sure was a swwet lady.

Donnie and Nancy sending thoughts and many hugs to you and the whole family.

May laughs and tears.. One truly remarkable women

Nancy your mom was so sweet. I know you will miss her but you did so much for her. You gave her such a good life. Prayers for you and your family.

Had some really good hours setting with your mom.
Thanks for trusting me with her care. She will be missed.