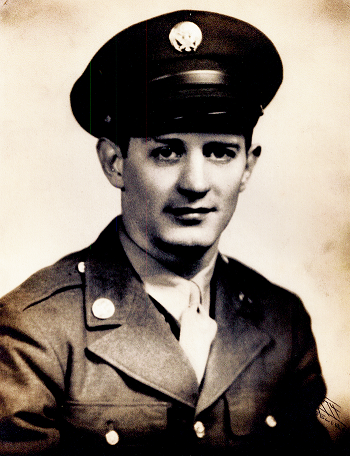 Matthew L. Siebieda, 98, of Bellaire, OH passed away peacefully in his home surrounded by loved ones on Thursday, April 5, 2018. He was born on November 27, 1919 in Wheeling, WV one of nine children of Joseph and Antonina Drobek Siembieda.

Matthew worked at Wheeling Steel and Ormet. He was a member of St. John Catholic Church, Disabled American Veterans, United Steel Workers and Bellaire Son’s of Italy. Everyone knew Matthew as Matt, always full of life and love for his family, church and country.
He served in WW II with the U.S. Army’s 3rd Infantry Division which saw combat in North Africa, Sicily, Italy, France, Germany and Austria for 531 consecutive days which included participating in six independent invasions in Europe. He was wounded twice and shrapnel which could not be removed, returned to join his troops in battle which earned him several medals including the Purple Heart. He was an avid story-teller of his life as a soldier to help keep alive the memory of his fellow soldiers and to remind all the sacrifices made by many. You would never see Matt without his army cap which he wore proudly.

He is survived by his loving wife of 70 years, Frieda Cetorelli Siebieda; his son, Larry (Lillian) Siebieda and daughter, Paula Siebieda, both of Bellaire; grandchildren, Jeremy Siebieda of Bridgeport and Kathy (Brian) Logan of Atlanta; his sister, Helen Horbatak; sisters-in-law, Shirley Siebieda and Mary Belot; brother-in-law, Vondi Cetorelli; many nieces and nephews, great-nieces and great-nephews.

Friends will be received on Sunday from 5-8 pm at Bauknecht-Altmeyer Funeral Homes & Crematory 441 37th Street Bellaire, OH with a Vigil Service at 7:45 pm. Sons of Italy service at 7:30 pm in the funeral home.

Funeral Liturgy with Mass will be celebrated on Monday at 9:30 am at St. John Catholic Church with Fr. Daniel Heusel as celebrant. Entombment in Holly Memorial Gardens, Pleasant Grove, OH. Full Military Honors will be conducted by the Belmont County Veterans Association at the cemetery.

In lieu of flowers, memorial contributions may be made to Wounded Warrior Project or St. Jude Childrens Research Hospital by going to “TMCFunding.com”

Share your thoughts and memories of Matt with his family at www.bauknechtaltmeyer.com

Larry, Lillian and family. We’re so sorry to hear or Mr. Siebieda’s passing. Our thoughts and prayers are with all of you. Marty and Lorraine

Our deepest sympathies for your loss.

I am so sorry to hear of Matt’s passing. My God grant you peace knowing that he is standing in the presence of his Heavenly Father.

My sincere and deepest condolences to the family and friends of Mr. Siebieda. Denny Albaugh

My prayers go out to my classmate, Larry Siebieda, and to all members of his extended family. I share your loss and grief and convey my hope that God give you strength to mourn your loss and move on. Know that your father will be looking down on all of you until you reunite with him in Heaven.

May your memories of Matthew L. Siebieda, give you peace, comfort and strength…