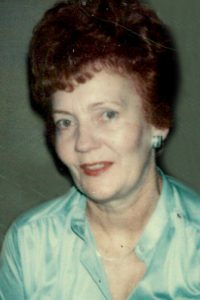 Maxine V. “Mickey” Marling, 97, of St. Clairsville, OH formerly of Bellaire, OH died Monday, September 10, 2018 at Belmont Manor Nursing Home. She was born January 27, 1921 in Farr, WV a daughter of the late Floyd and Harriett Wiley Conley.
Mickey was a retired bookkeeper from Belmont Community Hospital and later worked at Union Optical Center in Martins Ferry. She was a member of Bellaire Presbyterian Church where she served as Elder, and was past treasurer of Presbyterian Woman’s Association.
In addition to her parents, she was preceded in death by her husband, Robert W. “Bud” Marling in 1983; a son, David Marling in 1962; a brother, Eugene Conley in 1992.
Surviving are several nieces and nephews.
Private burial in Belmont County Memorial Park Cemetery, St. Clairsville at the convenience of the family.
Arrangements by Bauknecht-Altmeyer Funeral Homes – Bellaire.
Share your thoughts and memories of Mickey with her family at www.bauknechtaltmeyer.com

I will treasure every moment and every memory. I feel blessed that I got to know her the way I did. Such a wonderful kind hearted person and the best friend anyone could ever have. I love you Mickey. Shine bright
I will miss you

My grandma Harriet Dunning and Mickey best friends miss and love them both!!

Mickey and my grandma Harriet Dunning best friend love and miss them both!!