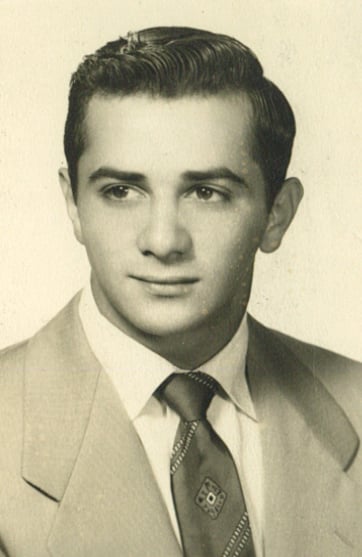 Nick Trolley, 79. of Shadyside, Ohio passed away on Monday February 1, 2016 with his family by his side.
Nick was born August 22, 1936 in Bellaire, Ohio a son of the late Edward and Sophia Zatezalo Trolley.
He was retired from the Ormet Corporation Hannibal, OH, and a member of St Mary Catholic Church Shadyside where he was a former organist.
Preceding him in death, in addition to his parents, was infant brother, Richard Anthony Trolley.
Surviving are 4 daughters, Nikki (James) Fleming of Croton, OH, Lori (Mike) Kernik of Shadyside, OH, Lisa (Chad) Smith of St. Clairsville, OH and Amy (Dominic) DeFelice of Shadyside, OH, a sister, Martha Luke of Shadyside, OH, 7 grandchildren, Tim and Jonathan O’Grady, Michael and Steve Kernik, Tristen and Lexie Smith and Dante’ DeFelice ,6 great grandchildren, Timmy, Rhyan, Brandon, Kayla, Bo and Karli, his former wife, Sandra S. Trolley of Shadyside, OH.
Nick was a professional musician for over 60 years having worked with numerous bands throughout the Ohio Valley. His band “Nick Trolley and the Imperials” was a favorite from the 1950’s through the 1980’s. He also had the great pleasure of working with the “5 D’s” in more recent years. Nick loved many forms of Music but Jazz was a definite favorite.
Nick’s passion for musical performance has been passed down and lives on through his children, grand-children and great grand-children. He will be sadly missed.
A memorial visitation, will be held at St. Mary Catholic Church, East 40th Street, Shadyside, Ohio Monday February 8, 2016, from 10am until time of celebration of Life and Funeral Liturgy with Mass at 11am with Fr. Samuel Saprano officiating.
Interment will be in Mt. Calvary Cemetery, Bellaire, OH.
Memorial contributions may be made to, Artists on Call, a non- profit organization, to establish a music scholarship in Nick’s name, @ Pob 297, Croton, Ohio 43013.
Condolences may be expressed to the family at www.bauknechtaltmeyer.com

So sorry for your loss. I remember Nick playing in his band especially at Fontana’s in Tiltonsville.

I had the opportunity to Play a few jobs with Nick back in the fifties. I remember him as being good guy and a good musician. God Bless Nick and family.

So sorry to hear about your loss.

Nikki, Lori, Lisa, and Amy- I am so very sorry for your loss. I had not seen your dad for many years until last year. He joined your Aunt Marcie and me for lunch one day when I was down visiting. I had such a great time catching up with him. He always had a great sense of humor. He and you are in my prayers. May he rest in peace.

I am truly sorry for your loss. Nick brought joy to many people by means of his music. During this difficult time please take comfort in your memories and in Gods word the Bible and the promises found within. Matthew 6:9,10; 2 Revelation 21:3, 4; 2 Peter 3:13.

I am so sorry for your loss. You all are in my prayers. When I saw him at work he always a gentle smile.

I am so sorry for your loss. I worked in the Ormet Lab for Nick for many years. He was a good foreman. He called me probably about a year ago. I am sorry to hear of his passing and I pray that God will comfort you in your loss.

So sorry to hear about your loss. Prayers for all of you.

Nikki, Lori, Lisa, and Amy, we are saddened by your father’s passing and we are so very sorry. He touched our lives deeply and will be remembered forever.

I have countless fond memories of many music jobs over the years. It was joy to perform with Nick and an honor to be his friend. He will be missed.