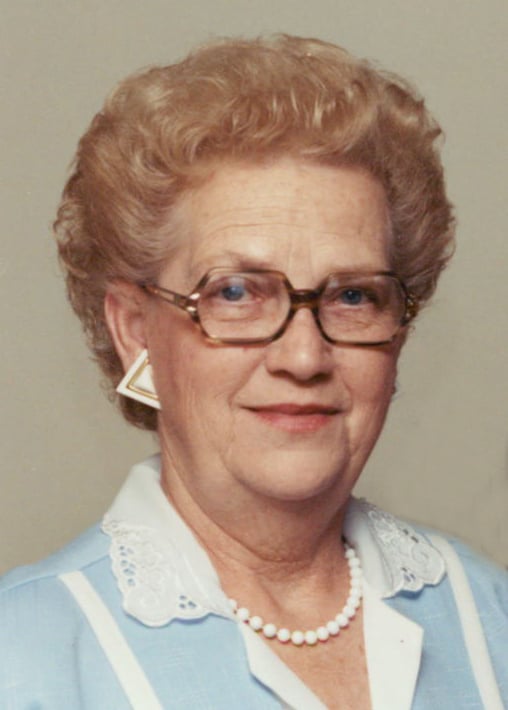 Olive Mae Carle Precek resident of Shadyside, OH, passed away Thursday October 13. 2016 at the age of 95. She leaves to mourn her loss her husband William of Shadyside, 2 Sons, Richard (Kathy) of Albuquerque, New Mexico and Randall (Lorraine) of Springfield Ohio. Seven grandchildren; Ian Dewing of Orford,CT, Joshua Precek, Megan Millican (Glen) of Albuquerque,NM, Nick and Chris Precek (Aryca) Springfield, Ohio 4 great-grand daughters; Erin and Morgan Dewing of San Raphael CA., Riley and Emily Millican of Albuquerque, NM, Several nieces, nephews, and many friends in the Shadyside area.
She was united in marriage to William Precek on June 30,1942 at the First Christian Church in Shadyside where they still attend. They have resided in Shadyside for 74 years.
Olive was the daughter of the late Russell and Loretta Walters Carle. She was raised on a farm in the Beallsville area. After graduating from Beallsville High, she moved with her sister Dorothy and husband LaVerne (Buzz) Knuchel to Weirton, WV where she worked at Islay’s until Bill returned from the Army. She later worked at LS Good’s department store until she retired.
Dorothy Knuchel preceded her in death along with a brother, Emory Carle.
She was a kind and loving wife and mother, a good neighbor who loved to see her neighbors and friends happy and prosperous. She will be sorely missed.
Family and friends will be received Tuesday from 5-8pm at the Bauknecht-Altmeyer Funeral Homes and Crematory, 3900 Central Avenue, Shadyside, Ohio where funeral services will be held at 11am Wednesday with Pastor Eric White officiating.
Burial follows in Powhatan Cemetery, Powhatan Point, Ohio.
Memorial contributions may be made to the First Christian Church, Disciples of Christ, Shadyside, Ohio by going to TMCFunding.com. To donate please CLICK HERE.
Condolences may be expressed to the family at www.bauknechtaltmeyer.com

Olive was a lovely lady. We enjoyed sharing special occasion family dinners together. She always wrote such beautiful notes. It was a privilege to have known her and her family. May her Faith bring everyone comfort and peace.